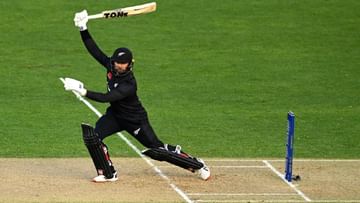 When Devon Conway was close to his century, his muscles got stretched. He was limping while taking runs.

Devon Conway scored a century in the third ODI

New Zealand batsman Devon Conway has become India’s headache in the third ODI. Moaning in pain, he hit the third century of his ODI career. Conway completed 100 runs in 71 balls. He completed the century by hitting two consecutive sixes in the first two balls of the 24th over. Conway had to take pain killers before reaching here. Actually when he was close to his century, then his muscles got stretched. He was limping while taking runs. Meanwhile, Sanjay Manjrekar, sitting in the commentary box, told that Conway had taken a pain killer.

Conway had scored a century in Pakistan a few days later and now he repeated his same performance in India as well. Conway has become the second New Zealand batsman to score the fastest ODI century against India. Michael Bracewell completed a century in 57 balls in the first match of this series.

Talking about Conway’s innings, the start of the Kiwi team chasing the target of 386 runs was very bad. New Zealand lost the wicket of Finn Allen on the second ball of the innings. The account of the visiting team could not be opened. Conway then froze at one end and struggled to hold the innings together, sharing a 106-run partnership with Henry Nicholls, then a 78-run partnership with Darrell Mitchell. However, Captain Tom Latham could not support him. He was dismissed for a golden duck by Shardul Thakur. Even Glenn Phillips could not keep up with him.