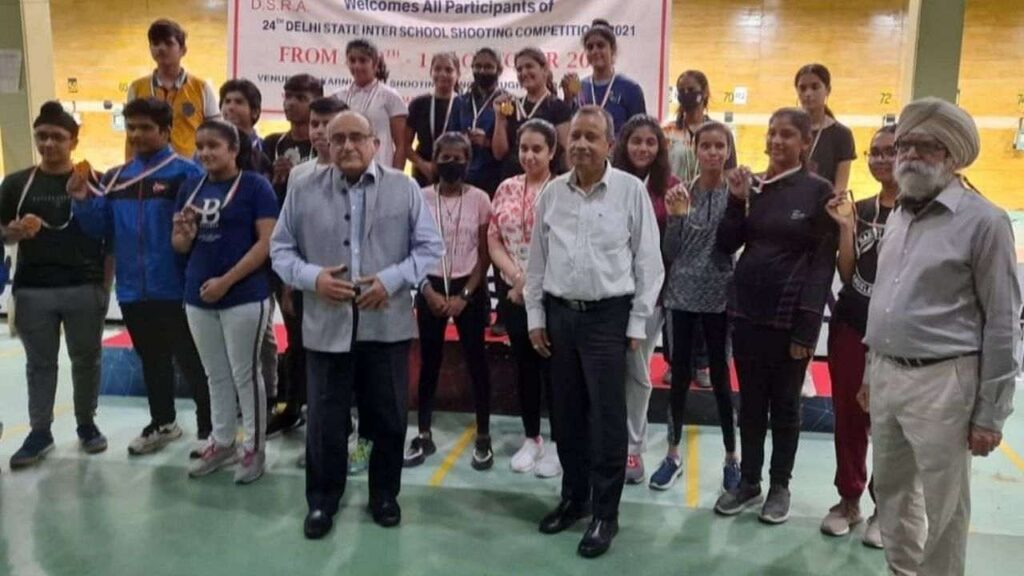 The performance of Indian shooters in the Tokyo Olympics (Tokyo 2020) may not have been good, but despite this, there is interest and enthusiasm among the youth of the country about this sport, which was reflected in the Dr Karni Singh Shooting Range of Delhi. Range), where the 24th Delhi State Inter-School Shooting Championship concluded last evening. The Delhi State Rifle Association (DSRA) organized this shooting match. Justice Manmohan Sarin and Delhi Election Commissioner Sanjay Kumar Srivastava honored the medal winners on the occasion and also told these budding shooters the tricks of success.

Congratulating the medal winners, Justice Manmohan Sarin also boosted the morale of the fourth and fifth ranked shooters who missed out on winning medals by a small margin. Delhi Election Commissioner SK Srivastava also highlighted the importance of sports and said that “Sports teaches us how to be healthy and face defeat in life and also how to prepare for victory after defeat. He said that shooting is a game of concentration, in which India’s young shooters are performing well.

The enthusiasm about the shooting is shown by the fact that this time record entries came in this championship. Jaspal Singh Marwah, treasurer of the Delhi State Rifle Association, said, “This time more than three hundred school students of the capital have participated in the Delhi State Inter-School Shooting Championship, which is a record in itself. This match could not be held last year due to the Corona epidemic. There is still a fear of Corona among people, but we have organized the competition here following all the rules.

He became the champion in 10m air rifle

In the 10m Pistol (NR) youth men’s event, Jasvir Singh Sahni scored 376 points with precision shooting, Yoganshu Gulia won the silver medal with a score of 367 points and Anuj Singh Rajput also scored 367 but He had to be content with the bronze medal.

Parisha and Rayarth No. 1 in Air Pistol

In the 10m Pistol (ISSF) Youth Men event, Rayarth Rai won the gold medal by scoring 561 points, Jayishnu Kaushik also scored equally but had to satisfy the silver medal, Dhruv Bhatia won the bronze medal with 558 points. In the sub-youth category of the event, Kaushal Singh won the gold medal with a score of 561 points, Shivanand Sagar (558) won the silver medal and Abhishek Nagar (556) won the bronze medal.

Also read: IPL 2021: RCB veteran salutes Virat Kohli’s captaincy, said – the impact he made on the team is no less than the trophy