Joined the army and then became a shooter, Subedar Gurpreet Singh missed by just 2 points in Rio 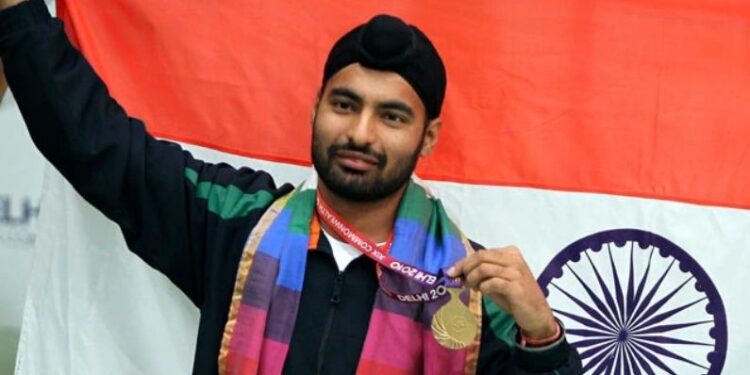 Indian shooters have proved their mettle all over the world. This time in the Tokyo Olympics, 15 Indian shooters are participating in different shooting events, and they are expected to win many medals.

Indian shooter Gurpreet Singh could not play the final due to two points.

There was a big expectation of a medal from India’s shooter Gurpreet Singh in the Rio Olympics. Despite scoring well in the qualification round of the 25m rapid fire pistol event, he could not make it to the finals. He missed out on reaching the finals by just two points. Gurpreet Singh won 2 gold medals in the 2010 Commonwealth Games. Then in the year 2018 at the World Championship, he won the silver medal in the standard pistol event. Apart from this, Gurpreet has performed well in many big matches at the national and international level. Gurpreet Singh had a special conversation with NewsNCR about his performance and memorable moments in the Rio Olympics.

Indian Army Subedar Gurpreet Singh, who raised the country’s flag in many international shooting matches, said, “Indian I joined the Indian Army in the year 2004 as a soldier, then later came to know that there is also a sport of shooting here. One can also join the army as a player. In 2007, when I gave a trial for the army’s shooting team, I got selected. Could not play 2012 Olympics, but I got this opportunity again in 2016 Rio Olympics. Recalling the memories of the Rio Olympics, Gurpreet says, “The arrangement to stay and eat there was very good, Indian cooks were also there, but we did not eat dal, on the day the dal was made, I took cheese pizza and removed the cheese from it. Used to eat like bread. If we talk about sports, we got good support from the Sports Authority of India to prepare for the Olympics.

‘Maybe it wasn’t our day’

On missing out on making the final of the rapid fire event at Rio Olympics despite good preparation, Gurpreet says, “I missed the final by just 2 points, well, it’s all a matter of time, people 0.1 Also miss the opportunity by the margin of . The Olympics is the biggest competition in the world, in an event only two players of a country can play, each country sends its best players. There were many such players in the match, whom we had defeated earlier. Maybe they worked harder than us in the Olympics. Luck should also be with us, maybe it was not our day. I scored 581 in the rapid fire event, it was not a bad score.”

One series was bad and the final went away

Gurpreet Singh said, “The final of rapid fire pistol in Rio was closed at 583, in rapid fire the top 6 players reach the final. I was in seventh place. In the remaining events of rifle-pistol shooting, 8 players play in the final. I had one bad series out of 6 in the qualification round, in which my score was 90. Due to this the total score got reduced and I missed the final. On this, I will say that perhaps my hard work was lacking which spoiled one of my series. It was a 4-second series of the first half match, in which the first round was of 44, and the second was of 46. 46 is okay, it can be covered, but the round of 44 was very bad. After that the pressure increases significantly. However, the next day I played the second half match very well.

Gurpreet could not qualify for Tokyo Olympics

When asked why Gurpreet could not make it to the Tokyo Olympics, he said, “After the Rio Olympics, I was in good form for a year, but my score was not increasing significantly. If two-four points keep going up and down, then the technique has to be changed. April-2017 I made a lot of changes in my game, its result was also good, I made a new national record. But I could not adapt to these things for a long time, because it is very difficult to leave what I was doing for the last eight years. Then the coach told some other things, so a lot of time was spent in this. Then for some time I stopped focusing on rapid fire. Later everything stopped due to COVID, during which there was a long break. After that started training again, so now there is a lot of improvement in my shooting. For a big competition like the Olympics, you have to perform consistently.”

He said, “I also shoot 10m pistol 2-3 times a week, which is a basic event, it is necessary for everyone. But mainly I do 25 meter rapid fire event only. Next, I will also focus on 10m pistol. Equipment is very important in shooting. After the Rio Olympics, I had a new grip made of the pistol, if it was not set, it took a long time to adapt it. And most of all, your brain balance should be fine for shooting. The guns are all the same, the role of the grip is very important in 25 meter pistol shooting.

15 Indian shooters have gone to Tokyo

Gurpreet Singh says, “Both mental and physical training plays an important role in the sport of shooting. If you have done mental training and do not fire the bullets properly then you cannot be successful. At the same time, controlling your mind is probably the most difficult thing in the world. In such a situation, both types of training have their own place of great importance. Now my target is 2024 Olympics.

Indian shooters have proved their mettle all over the world. This time in the Tokyo Olympics, 15 Indian shooters are participating in different shooting events, and they are expected to win many medals. Indian shooters have won a total of four medals in the Olympics so far. Rajavardhan Singh Rathod first raised the flag of the country by winning a silver medal in the 2004 Athens Olympics. Abhinav Bindra created history by winning the gold medal at the 2008 Beijing Olympics. Then in the 2012 London Olympics, India won the silver medal by Vijay Kumar and Gagan Narang brought laurels to the country by winning the bronze medal.

read this also: Changes in the important rules of hockey 9 days before the Tokyo Olympics, for the first time a team of 18 players will participate