Jadeja’s first reaction after retaining CSK, will ‘restart’ with Dhoni 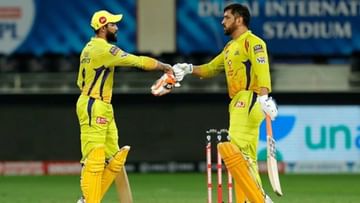 Since the last season of IPL, there were reports that all is not well between Chennai Super Kings and Ravindra Jadeja and it is possible that these two may not appear together further, but this did not happen.

Ravindra Jadeja has been retained by CSK. (File Pic)

For the next season of the Indian Premier League (IPL), all the franchises have released the list of their retained players. With this, it has become clear that all-rounder Ravindra Jadeja will once again be seen in Chennai Super Kings jersey with Mahendra Singh Dhoni. Last year, reports of tussle between the franchise and Jadeja had caught fire and due to this there was speculation that Jadeja might not be seen in Chennai this time.

All these speculations came to an end on Tuesday evening as Jadeja’s name is also included in the players retained by Chennai. After this, the camaraderie of these two has been seen on the tweet. Jadeja was made the captain of the team last year as Dhoni had relinquished the captaincy before the season but Jadeja decided to step down from the captaincy in the middle of the season and Dhoni took charge again. After this Jadeja was injured and could not play the last few matches. Since then there were reports that all is not well in Jadeja and CSK.

After the list of retained players came out, Jadeja tweeted a photo of himself and Dhoni, in which Jadeja is smilingly bowing his head in front of Dhoni and greeting him. With this photo, Jadeja wrote, “Everything is fine. Restart.”

CSK retweeted this tweet and wrote, “Always and Forever.”

From last year itself there were reports that the franchise and even Dhoni is not happy with Jadeja and that is why Jadeja should not appear in the team next year. But a few days ago the news also came that the franchise is not with Jadeja but Dhoni has supported Jadeja and advocated to retain him in the team. Dhoni and Jadeja have played with each other for a long time not only in Chennai but also in the Indian team.


Jadeja started his IPL career with Rajasthan Royals and won the title with Rajasthan in the first edition of the league in 2008. After this he also went to Kochi Tuskers and from there came to Chennai. In 2012 he came to Chennai. When Chennai was banned, this player also played for Gujarat Lions under the captaincy of Suresh Raina for two years, but when he came back to Chennai, Jadeja returned with him.