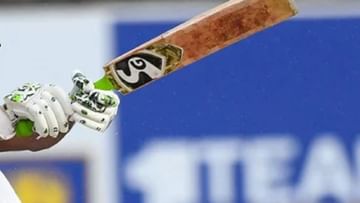 Vishwarajsinh Jadeja hit a blistering triple century against Kerala. He hit 27 fours in his innings.

Vishwarajsinh Jadeja played the last match for Saurashtra against UP in November last year.

Saurashtra batsman captain Vishwarajsinh Jadeja created a furore with the bat on Monday. He scored a triple century against Kerala in the CK Nayudu Trophy. Due to Jadeja’s quick innings, his team Saurashtra declared their innings by scoring 550 runs for 8 wickets. The Saurashtra captain hit 27 fours and a six in his brilliant innings. Jadeja’s fiery innings is being discussed everywhere. This is the biggest innings of his career. Jadeja, who returned to the field after about 2 months, thrashed the Kerala bowlers fiercely.

Jadeja played the last match for Saurashtra against UP in November last year. Born on 19 July 1998 in Rajkot, Jadeja made his professional debut in late 2018 in a Ranji Trophy match against Maharashtra.

Before this match against CK Naidu, he scored 671 runs in 12 first class matches at an average of 30.50. Earlier, his best performance was 105 not out. He scored 1 century and 5 half-centuries. At the same time, he has 499 runs in 20 List A matches. Jadeja has scored 5 half-centuries in List A cricket. Talking about the CK Nayudu Trophy match being played between Saurashtra and Kerala, Saurashtra had a very bad start while batting first.

Team recovering after a bad start

Saurashtra had lost their 3 wickets for just 79 runs. After this, Captain Jadeja froze at one end, but at the other end he got strong support from Gajjar Samar, who scored a century. On the basis of the excellent partnership between the two, Saurashtra’s team reached 215 to 465 runs. The team got the sixth blow in the form of Gajjar. Jadeja was also dismissed shortly after his return to the pavilion. Pravan Kalra and Neil Pandya increased the pace of the innings and when the score reached 550 runs, the captain declared the innings.