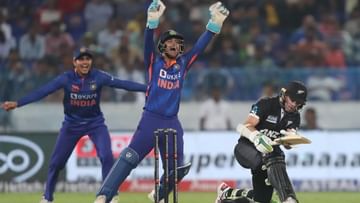 Hardik Pandya had to bear the brunt in the form of his wicket despite the mistake of Tom Latham in Hyderabad.

Ishan Kishan replied to Tom Latham in his own style.

in Hyderabad India and New Zealand The first ODI match between was named after Shubman Gill’s memorable, spectacular and historic double century. There was only and only Gill’s double century in the discussion. However, before Gill’s double century, a controversial decision surprised everyone, whose victim was Indian all-rounder Hardik Pandya. Apart from the third umpire, New Zealand captain Tom Latham was at the center of this controversial decision. Team India’s wicketkeeper Ishan Kishan took revenge for his act. What is the whole matter, tell you.

During the Indian team’s batting in the first ODI against New Zealand on Wednesday, January 18, the third umpire’s decision against Hardik Pandya surprised. Hardik missed while trying to cut the New Zealand bowler’s ball and the bails placed on top of the stumps were shaken. However, nothing was clear and hence the help of the third umpire was taken.

When the third umpire saw the replays from different angles, it was not clearly visible in any of them that the ball touched the bails. At the same time, it was also seen from some angles that the ball went straight into the gloves of wicketkeeper Latham and then the bails were shaken by his gloves. Now Hardik was neither out of his crease nor the ball hit the bat. That means neither he could be stumped out nor caught out.

Despite this, the third umpire shocking everyone called it bold and Hardik Pandya had to return to the pavilion. Shortly after this, Latham once again dropped the bails from the gloves.

Ishan taught a lesson to Latham

Now whether Latham did this intentionally or he made these mistakes both the times, only Latham can answer this. Team India’s young wicket-keeper batsman Ishan Kishan definitely did not like all this and he decided to teach Latham a lesson. When Latham came to the crease during New Zealand’s batting, Ishan adopted the same method against him.

On a ball from Kuldeep Yadav, Latham defended by going on the backfoot and immediately his bails fell. The Indian team started appealing and the umpire had to resort to the third umpire. Replays showed that Latham was not hit wicket, but Ishan had dropped the bails. After the replays came out, Latham was seen shaking his head in displeasure, but Ishan didn’t mind and started laughing looking at Latham. Apparently Ishan did all this just to taunt Latham, in which he succeeded.