Ishan Kishan turned out to be true to his promise, what he said to fellow players in the dressing room, made it come true on the field in the first ODI 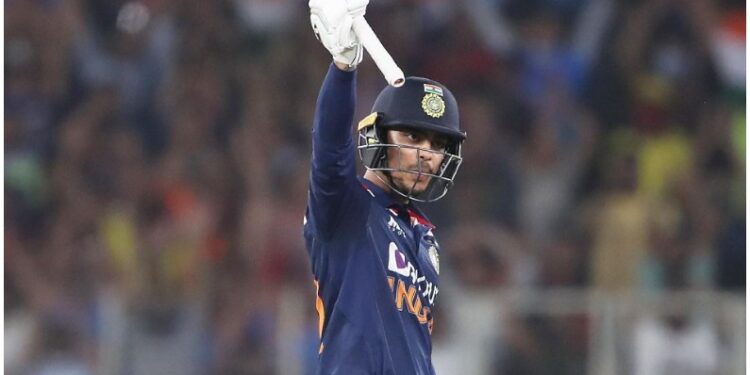 Ishan Kishan is the only batsman in the world to hit a six off the first ball while making his ODI debut on the birthday. He also scored a half-century in his debut ODI.

In the dressing room, he came on the field promising fellow players to hit a six on the first ball.

The praise of Ishan Kishan is less. While making his ODI debut, he not only was honest with himself, but also kept the promise made to his fellow players. If he prepared the foundation for India’s victory by getting on the field, then while doing so, he showed the truth of what he said to his teammates in the dressing room. It is not easy for any batsman to do this in the very first innings of ODI cricket. But, Ishan Kishan did this fearlessly.

Now you must be thinking that the wicket-keeper batsman, who made his ODI debut from the first match against Sri Lanka, made such a promise to his fellow players, after all, what promise did he fulfill as soon as he landed on Premadasa. So let us tell you that the promise that he has fulfilled, he had mentioned it to the fellow players in the dressing room even before it was his turn to bat. This promise was to hit a six on the very first ball, on which Ishan came true.

Kishan opened the secret of the six on the first ball

The 23-year-old left-handed wicket-keeper batsman revealed the secret behind the six he hit on the first ball of the first ODI on broadcast channel Sony. He told that, “He had told everyone in the dressing room that whatever the first ball would be, wherever it would hit, he would hit a six on it. He is happy that what he said came true.” Playing his first innings in ODI cricket, Ishan Kishan, who landed at Premadasa ground in Colombo, opened his account by hitting a six off the very first ball.

The first ODI between India and Sri Lanka was played on 18 July. This day was also special for Ishan Kishan regarding his birthday. Team India had already given him a birthday gift by giving him a chance to debut. Now it was Ishan Kishan’s turn and he too did not hesitate to give return gifts. He started it with a six off the very first ball of his innings. While making his ODI debut on his birthday, he became the only batsman in the world to hit a six off the first ball. After this, Kishan scored a brilliant half-century in the match. Earlier, he had scored a half-century on his T20 debut as well. In this way, he also became the second batsman in the world to score a half-century on the debut of ODI and T20.