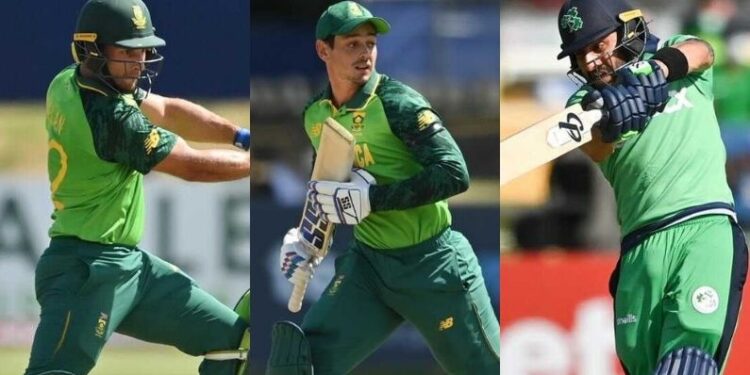 South Africa’s team, which suffered a shocking defeat in the second ODI, leveled the series with this match as well. Now T20 series will be played between both the teams.

The South Africa Cricket Team, which was embarrassed by a shocking defeat three days ago, completed its account on Friday 16 July. South Africa, playing the ODI series against Ireland, had to face a crushing defeat in the second match, but in the third match, the team made a comeback and won the series by 70 runs and ended the series 1-1. . The rain of hundreds made this match special. A total of 3 centuries were scored in the match from both the teams and a lot of runs were scored. For South Africa, Janneman Malan scored a tremendous century and played an unbeaten innings of 177 runs. Apart from him, Quinton de Kock also scored a hundred. At the same time, Simi Singh, the eighth-ranked batsman for Ireland, made a record by scoring a century.

In the second match of the series held in Dublin, South Africa decided to bat first. Senior wicketkeeper-batsman Quinton de Kock returned to the team and its effect was visible on the team’s batting. Dekock, who came for the opening, gave a tremendous start to the team along with his partner Yaneman Malan. De Kock in particular looked more aggressive and attacked the Irish bowlers. On the other hand, Malan kept the front at the other end while playing carefully.

Together, both took the team past 200 runs. During this, both completed their respective centuries. De Kock first scored his 16th ODI century. He completed his hundred in just 83 balls with the help of 10 fours and 3 sixes. In no time, Malan also scored his second ODI century. Malan took 126 balls to reach here. De Kock was dismissed after scoring 120 runs (11 fours, 5 sixes) in 91 balls. Both shared a partnership of 225 runs.

After de Kock’s dismissal and completing his century, Malan also changed gear and lashed out at the bowlers. From here he started raining the boundaries. Malan, who came to play the first ball of the innings, remained frozen till the last ball of the 50th over and returned unbeaten after scoring 177 runs (16 fours, 6 sixes) in 169 balls. South Africa scored 346 for the loss of 4 wickets.

In reply, Ireland had a very poor start. The top 3 batsmen of the team returned to the pavilion for only 27 runs. Team captain Andy Balbirnie, who scored a century in the previous match, could only score 7 runs, while veteran opener Paul Stirling was dismissed for 11 runs. Both were made their prey by spinner Keshav Maharaj. For Ireland, in the middle order, Curtis Kaempfer and number eight batsman Simi Singh continued the struggle by playing belligerent innings. The partnership of 104 runs for the seventh wicket between the two. Camper was dismissed for 54 runs in 54 balls.

At the same time, Irish all-rounder Simi Singh of Indian origin stood on the field for his team till the end. During this he completed his first century in ODI cricket. 34-year-old Simi scored 100 runs in just 91 balls with the help of 14 fours and remained frozen till the end. With this, he made the record for the highest score in ODIs at number eight. Ireland were bundled out for 276 runs in 47.1 overs and South Africa won the match by 70 runs.

Also read: IND vs SL: Bhuvneshwar Kumar told the future plan, will the focus be on Test cricket or ODI-T20?