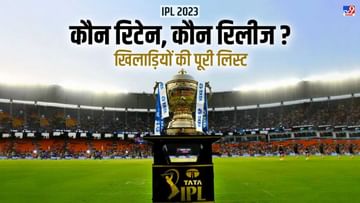 Like IPL 2022, a total of 10 teams will be seen playing in IPL 2023. All the teams have retained and released players to ensure that they have enough money in their wallets before going into the 2023 mini auction.

The excitement about IPL 2023 has started. Almost everyone knows when and where the mini auction is. For those who do not know, let us tell you that the date of mini auction is 23rd December and it is to be held in Kochi. But before the mini auction, all the teams have to do the retention of the players, for which the last date is 15th November. Means the deadline is about to end. In such a situation, it is important for you to know that till now which teams have finalized the names regarding the retention and release of the players.

Like IPL 2022, a total of 10 teams will be seen playing in IPL 2023. All the teams are retaining and releasing players to ensure that they have a substantial amount in their purse before going into the 2023 mini auction.

4-time IPL champion Chennai Super Kings is looking for good players to increase their strength. She would like to end this search in the mini auction of IPL 2023.

IPL 2022 did not go well for Mumbai Indians. But in the next season i.e. IPL 2023, this team is in a mood to perform better. For this, Mumbai has traded Jason Behrendorff to Royal Challengers Bangalore.

The 16th season of IPL is going to happen, but Royal Challengers Bangalore are still waiting for their first trophy. To end this wait, they would like to build a strong team.