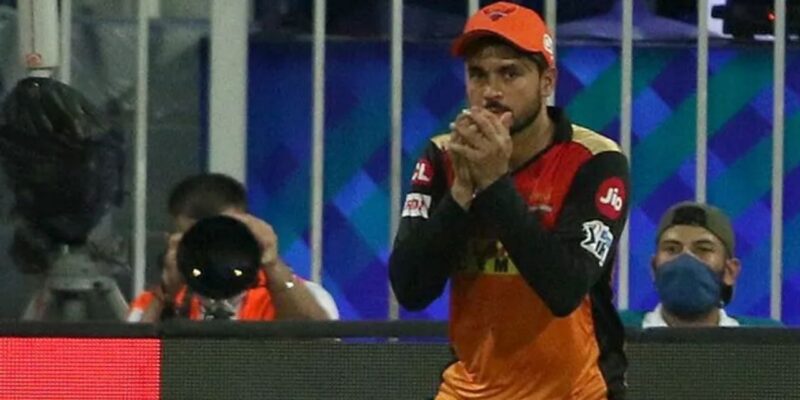 IPL 2021 was postponed in the first week of May due to COVID and Corona has knocked in the second phase as well.

Saturday is the day of double header in IPL 2021. The teams of Sunrisers Hyderabad and Punjab Kings are facing each other in the second match of the day. The condition of both the teams is not good at the moment. These two just need a win to keep their playoff chances alive. This is the second phase of the current season. Earlier this season started in India in April but in the first week of May, Corona cases broke into the bio bubble, due to which the league had to be stopped midway. For this reason, now the second leg of the league is being organized in the United Arab Emirates. Although the players are still afraid of Corona. Its hallmark was also seen in the match being played between Sunrisers and Punjab today.

Manish Pandey accidentally kissed the ball while fielding, but then he was probably afraid of Corona and he started spitting on the middle ground. In fact, in the 20th over of Punjab’s innings, Nathan Ellis tried to play a big shot on the third ball of Bhuvneshwar, but taking the edge of the bat, the ball went up in the air towards the third man, where Manish Pandey took the catch. After taking the catch, Manish accidentally kissed the ball, but then he remembered something and started spitting again and again on the field. Due to Corona, bowlers are not allowed to apply saliva on the ball. Manish was probably tormented by the fear of Corona, due to which he started spitting continuously.

The second phase has also not remained untouched by Corona. Sunrisers Hyderabad’s left-arm bowler T. Natarajan was found to be COVID positive before the match against Delhi Capitals. After this he is in Quarantine. Although this has not affected the league, the Delhi-Sunrisers match was also held, the rest of the matches are also being held.

Such was the innings of Punjab

Punjab’s batting did not last much in this match. Batting first, the team could score only 125 runs for the loss of seven wickets in 20 overs. Edin Markram scored the most runs for him. Edin played an innings of 27 runs. Captain KL Rahul scored 21 runs. Chris Gayle scored 14 runs. Jason Holder took three wickets for Sunrisers. Sandeep Sharma, Bhuvneshwar Kumar, Abdul Samad and Rashid Khan got one success each.

On Sunday, the new cabinet ministers of CM Charanjit Channi will be sworn in, after discussion with the Congress high command, these faces are stamped