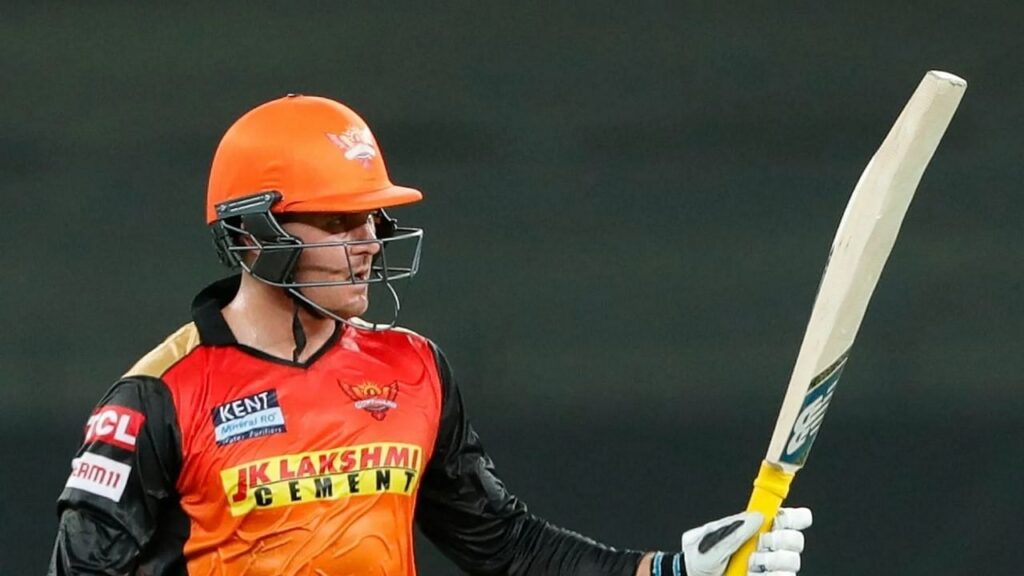 This is Sunrisers Hyderabad’s second win in this season and in this match, they have made it difficult for Rajasthan to make their way to the playoffs.

Sunrisers Hyderabad, almost out of the playoff race, also spoiled the maths of Rajasthan Royals in IPL-2021 on Monday. Sunrisers defeated Rajasthan by seven wickets in the match played at Dubai International Stadium. After this defeat, the hopes of going to the playoffs of Rajasthan have also got a setback. His path has become difficult. Rajasthan scored 162 runs for the loss of six wickets in 20 overs on the basis of captain Sanju Samson’s innings of 82 runs. Hyderabad achieved this target for the loss of three wickets in 18.3 overs on the basis of the innings of captain Kane Williamson (51 not out), apart from the half-century of 60 runs from Jason Roy, who came in place of David Warner.

Roy started the innings with Wriddiman Saha in this match and shared a 57-run partnership for the first wicket. Saha (18) was stumped by Mahipal Lomror at the hands of Samson. Meanwhile, Jason Roy continued to play his stormy innings. Saha’s departure had no effect on him. He continued to play his shots and kept sending the balls of Rajasthan bowlers across the boundary. He shared a 57-run partnership with captain Kane Williamson. Chetan Sakaria sent Roy to the pavilion on a total score of 114. He hit eight fours and a six in his 42-ball innings.

As soon as Roy got out, there was pressure on the Sunrisers team which increased with the dismissal of Priyam Garg (0). Priyam was run by Mustafizur Rahman on a total score of 119. The captain of the team, Williamson, however, stood and it was the responsibility of the team to win, which he performed well. The captain scored a half-century in 41 balls with the help of five fours and a six. Williamson gave the team victory by hitting four.

Such was the beginning of Rajasthan

Earlier, the captain played a stormy innings for Rajasthan. Samson hit seven fours and three sixes in his 57-ball innings. He got good support from young openers Yashasvi Jaiswal (36 off 23 balls) and Mahipal Lomror (29 not out off 28 balls). Samson and Lomror added 84 runs for the fourth wicket. After winning the toss and opting for Rajasthan, Evin Lewis (6) and Yashasvi Jaiswal hit a four each in the first over of Sandeep Sharma (1 for 30) but experienced Bhuvneshwar Kumar (1 for 28) did the second over. On the first ball, Lewis was sent to the pavilion. This was his over maiden. However, it did not have much effect on Jaiswal and he sent the balls of Sandeep and then Bhuvneshwar across the boundary. At the other end, Samson continued the momentum of the previous match. He hit two fours in the sixth over of Siddharth Kaul (2 for 36). Due to this, the team’s score in the power play became 49 runs for one wicket.

Sanju is seen in his color

Jaiswal hit a six on Sandeep Sharma who came to bowl in the ninth over but got bowled on the very next ball. He hit a six and five fours in his 23-ball innings and shared a 56-run partnership for the second wicket with Samson. The poor rhythm of Liam Livingstone (4) continued in this match as well, who was caught by Rashid Khan (1 wicket for 31 runs) to Samad. In the 14th over of the innings, Mahipal Lomror hit a six against Jason Holder (27 runs without success) to take the team’s score to 100 runs. After this, however, he was seen struggling to hit the big shot. Samson then welcomed Rashid for a six in the 15th over. He hit two sixes in the same over after completing his half-century in 42 balls by hitting a four over mid-off against Siddharth Kaul on the first ball of the next over. Meanwhile, in the 18th over, Sandeep dropped a simple catch of Lomror on the ball of Holder. Bhuvneshwar then spent just seven runs in the 19th over. After dismissing Samson in the last over, Siddharth sent Riyan Parag to the pavilion without opening the account. Only four runs came from this over. Hyderabad bowlers conceded just 11 runs in the last two overs as Rajasthan failed to put up a bigger score.

IPL 2021: Sanju Samson’s bat shines against SRH, then he has been added to his career, he has a special record name