The previous season was not good for CSK and the team finished seventh.

Viewers’ craze for Chennai Superkings takes place differently in every season of the Indian Premier League. The reason is simple. Mahendra Singh Dhoni. This is the reason that whenever it is talked about the most popular team in IPL history, the army of Chennai Super Kings will always be found at the starting place. The team has won the IPL title three times under the leadership of the magical player Mahendra Singh Dhoni. However, the previous season of the team in the UAE was extremely poor and CSK was ranked seventh in the eight teams’ points table. This was the first time in the last 13 years of the league when the team failed to make it to the playoffs. However, now the season is new and the attitude of CSK. Let’s know the full schedule of this season of Chennai Superkings.

This 14th season of IPL is also special for Chennai Super Kings because Mahendra Singh Dhoni is believed to be playing for the last time in IPL. It is unlikely that Dhoni, who retired from international cricket last year, will now play in the 2022 IPL. In such a situation, the team would like to leave no stone unturned to give them the gift of the title win. Dhoni himself has also appeared in practice in his full color. Now the fans are just waiting for them to land on the ground. 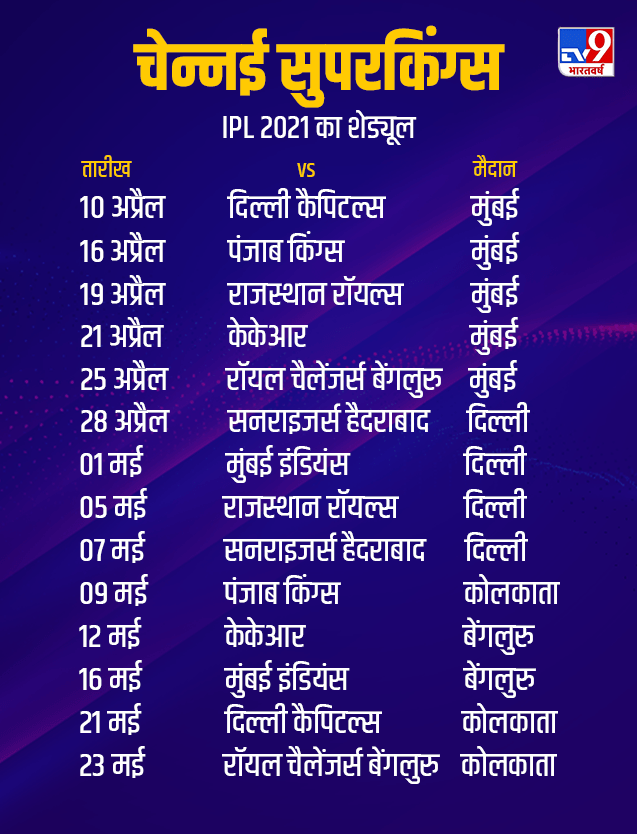 Although the 14th season of the Indian Premier League will begin on April 9 from the match between Royal Challengers Bangalore and Mumbai Indians, but the campaign of Chennai Super Kings will start from its next day i.e. April 10. Chennai will have to face Delhi Capitals in their first match. This match will be played in Mumbai. By the way, Chennai has to play the most matches out of its 14 league matches in Mumbai only. Here the team will play five matches. Apart from this, he has to play four matches in Delhi, three in Kolkata and two in Bangalore.

IPL 2021: Rohit Sharma does not feed this explosive player, does not remove it, has kept a puzzle sitting