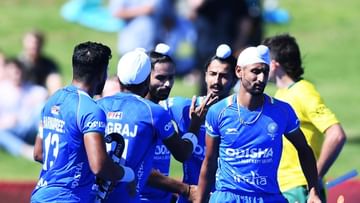 The Indian men’s hockey team played well in this match, but in the last five minutes, the team showed carelessness and Australia took advantage of it.

The Australian hockey team defeated the Indian team on the basis of two important goals scored in the last minute in the second match played in Adelaide on Saturday. The Australian team defeated India 5-4 in this match. In this match, India showed a good game, but in the last minutes it conceded two goals and had to face defeat. Akashdeep Singh took a hat-trick for India but he could not win his team.

Akashdeep Singh scored three goals in the 10th, 27th and 59th minutes. Apart from him, Indian team captain Harmanpreet Singh (31st minute) converted the penalty corner into a goal. Lachlan Sharpe scored for Australia in the fifth, Nathan Efroms in the 21st, Tom Craig in the 41st and Blake Govers in the 57th and 60th. Govers scored twice from penalty corners at the end of the match.

Australia made a bright start and took the lead in the fifth minute when Sharp fired past Indian goalkeeper PR Sreejesh at the very first attempt. The Indian team also responded quickly, with Amit Rohidas making a brilliant move from the left but the ball was stopped inside the circle by the Australian defence.

Akashdeep then equalized for India in the 11th minute when Hardik Singh created a brilliant chance for him. Six minutes into the second quarter, Australia again took the lead thanks to poor Indian defence. The Indian defenders failed to intercept a cross and Ifroms deftly deflected it and found the net.

Akashdeep again came to India’s rescue and leveled the score at 2-2 in the 27th minute with a sharp reverse hit. Australia were awarded a penalty corner just before half time but India’s second goalkeeper Krishan Bahadur Pathak was alert and avoided the danger. A minute after the change of ends, Harmanpreet scored from a penalty corner to put India ahead for the first time in the match.

The Indians earned successive penalty corners but the team wasted both the chances. In the 41st minute of the match, Australia earned another penalty corner, on which Craig scored on the rebound while Sreejesh saved the first drag flick. The home team continued to dominate and earned a few penalty corners but could not convert them.

India looked sloppy in the last five minutes of the match, with Germanpreet Singh getting an unnecessary green card, leaving the team one player short. Australia made full use of the opportunity and earned another penalty corner which Govers fired home with a powerful flick. But Akashdeep scored a goal a minute before the whistle to make the score equal to 4-4.


But poor defending inside their own circle cost the Indians dearly as Australia earned two more penalty corners. Out of this, Gowers scored in the second attempt to give his team a 1-0 lead in the series.