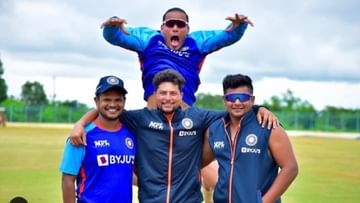 Sarfaraz Khan cried a lot after the Indian team was announced for the series against New Zealand and Australia; While he is performing amazingly in domestic cricket.

Sarfaraz Khan continues to do wonders in Ranji Trophy

4920 runs, 14 centuries, triple century… Despite doing all this, wearing the jersey of Team India still remains a dream for Sarfaraz Khan. The 25-year-old Indian batsman scored 3,380 runs in 36 first-class matches at an average of 80.47. It was difficult to stop Sarfaraz in the last 3 Ranji seasons. Scored 928 runs in 6 matches in one season of Ranji, then scored 982 runs in 6 matches and 801 runs in the current season. Despite this, he was ignored by the Indian selectors.

Recently, the BCCI announced the team for the limited overs series against New Zealand and the opening 2 Test matches against Australia and Sarfaraz Khan’s name did not appear anywhere in it. After which Sarfaraz has given a big statement regarding the selector.

Sarfaraz started crying after not being selected

According to the news of Times of India, Sarfaraz said that when the team was announced and my name was not in it, it was very sad. I was expecting selection. Sarfaraz is currently playing Ranji Trophy. He further said that the whole day I kept thinking why this happened. I was feeling lonely. I was crying too.

The selectors had assured

During this, Sarfaraz also talked about the selectors. He said that when I scored a century during the Ranji Trophy final in Bangalore, I met the selectors. I was told that I would get a chance in Bangladesh. Be ready for this. Recently met Chetan Sharma while going to hotel in Mumbai. He told me that there is no need to be disheartened and that my time will come. Good things take time to happen. you are very close you will get a chance

Sarfaraz’s bat is on fire

Talking about Sarfaraz, he scored 3380 runs in the first class. He has 12 centuries to his name. At the same time, in 26 List A matches, he scored 469 runs including 2 centuries. Sarfaraz scored 1071 runs in 84 T20 matches. Even at this time his bat is spewing fire. In the last 5 matches, he had scored 2 centuries and a half-century.