India will get next ‘Sreejesh’ in this World Cup, this is Reid’s masterplan 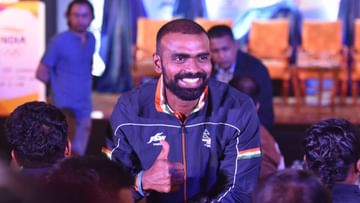 The main and experienced goalkeeper of the Indian hockey team is PR Sreejesh. However, Krishna Pathak is also getting equal opportunity in this World Cup.

PR Sreejesh gave a statement regarding the strategy

India has achieved a steady start in the Hockey World Cup. India had to play three matches in the group round. He has played two matches out of three. Their first match was against Spain where they won 2–0. At the same time, the match against England was a 0-0 draw. India’s defense played brilliantly in both the matches. especially the goalkeeper of the team PR Sreejesh and Krishna Pathak. Pathak, who sat on the bench in all the matches of the Tokyo Olympics, is getting equal opportunities this time.

Veteran PR Sreejesh feels it is a good coach’s strategy to have his fellow Indian goalkeeper Krishan Bahadur Pathak replace him in the alternate quarter in the ongoing Hockey World Cup matches. This will help India for the future. Head coach Graham Reid used Sreejesh and Pathak in alternate quarters in the two Pool D matches played so far against Spain and England. Sreejesh handled the Indian goal in the first and third quarters while Pathak did the same in the second and fourth quarters of the match.

Sreejesh said, ‘We wanted to prepare together for the next stages of the World Cup. If something ever happens to one of the two goalkeepers, the other one will be ready, so this is a good strategy. This experienced goalkeeper said, we are swapping quarters. He is getting experience while I have enough experience. This bodes well for the future. Both India and England created chances but could not score. England got eight penalty corners and not even one could be converted into a goal. India also could not score on any of the four penalty corners.

Sreejesh said, somewhere, we need to look at what we can do, what changes we can make in penalty corners or other goal-scoring opportunities. We should learn from the England match and prepare for the next match. He said, Wales is a very good team, they gave a good fight to Spain. We will analyze his game and plan accordingly.

Turkey Earthquake The history of devastating earthquakes in Turkey is heart-wrenching. Before February 6, 2023,…