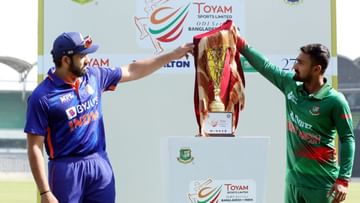 India Vs Bangladesh, 1st ODI: The Indian team has to play the first ODI against Bangladesh in Dhaka on Sunday.

Ind Vs Ban: Three ODI series will be played between India and Bangladesh

After the tour of New Zealand, the Indian team will face the tour of Bangladesh from Sunday. The series of first three ODIs will be played between the two teams, after which there will be a Test series. The players who went on break after the T20 World will return from this series. The preparations for the ODI World to be held in India next year have to start from here. Team captain Rohit Sharma says that his plan is ready and he knows what he has to do. Fans will keep an eye on Team India’s opening pair against Bangladesh.

If the consistent youngster Shubman Gill (rested for this series) also joins the team, it will be difficult for coach Rahul Dravid to solve the Indian top-order puzzle. In the next one year, the focus will be only on ODIs and India’s approach in 50 overs needs a big change. At this time India’s white ball team is going through this phase.

Many contenders for the opening position

A few years back, Rohit Sharma and Shikhar Dhawan were India’s favorite opening pair in ODIs with hardly any questions being asked or their place being debated. But Dhawan’s slow game in the powerplay and Gill’s arrival had to create possibilities. KL Rahul prefers to bat in the top order and has found success in it, but during the tenure of former coach Ravi Shastri, he played a few matches in the middle order.

Rajat Patidar and Rahul Tripathi may get a chance

The irony is that even after seeing these numbers, there is no clear indication of who should open the innings with Rohit for the series. Talking about the middle order, Virat Kohli’s number three is fixed, Shreyas Iyer is also slowly making his way to the fourth position in India. If Sanju Samson is not there in this series, then Rajat Patidar and Rahul Tripathi will hope to get a chance, who have done consistently well in domestic cricket and IPL (Indian Premier League). If Tripathi bowls a bit, then there can be back-up options in the absence of Hardik Pandya (rested due to workload).

Shami not playing is a big problem for India

With Mohammed Shami ruled out with a shoulder injury, Umran Malik has a chance to showcase his bowling skills on a pitch that is expected to favor batsmen. He also impressed in New Zealand conditions. Deepak Chahar, Mohammad Siraj and Shardul Thakur are sure to feature against Bangladesh, who are without regular captain Tamim Iqbal. Bangladesh’s newly appointed ODI captain Liton Das would like to lead with a good performance but it will also be a real test for the team playing without Taskin Ahmed. In the form of Mustafizur Rahman, Ibadat Hussain and Shakibul Hasan, their attack will be sharp but it is not that it cannot be dealt with.