IND vs SL: Sri Lankan coach and captain clashed on the field after India’s defeat, VIDEO of tension went viral 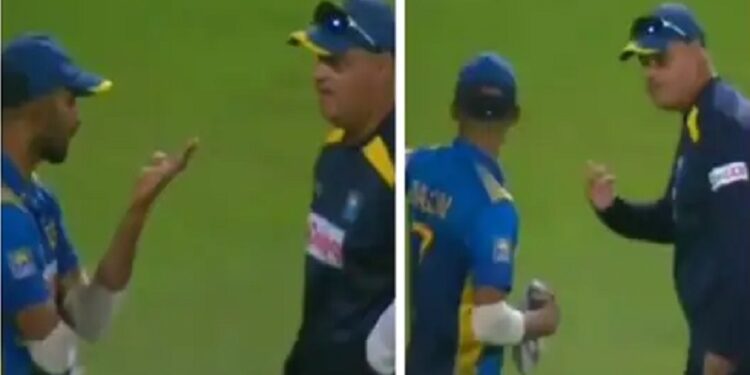 The Indian team has taken an unassailable 2-0 lead in the three-match ODI series. Although in the second match he tightened the noose on Team India, but then the match went out of the hands of the host team.

The Indian team defeated Sri Lanka by three wickets in the second ODI. After which there was an argument between Mickey Arthur and Dasun.

The Indian cricket team has taken an unassailable 2-0 lead in the three-match ODI series against Sri Lanka, led by Shikhar Dhawan. Colombo’s R. In the first match played at Premadasa Stadium, Team India won by seven wickets, while in the second ODI held on Tuesday, it won by three wickets. The team got this victory with the help of half-centuries from Suryakumar Yadav and then Deepak Chahar. Although there is absolutely no doubt that the Sri Lankan team had the upper hand for most of the time in the second ODI, but due to mistakes made on the crucial occasions, the hosts suffered defeat. During this, Sri Lankan team coach Mickey Arthur looked quite upset sitting in the dressing room and when the match was over, he did not delay in clashing with Sri Lankan captain Dasun Shanaka on the field itself. The video of their tussle is becoming fiercely viral on social media.

Actually, after the second ODI between India and Sri Lanka, former Sri Lankan legend Russell Arnold has also commented on this behavior of Mickey Arthur. He tweeted, “The conversation between the coach and the captain should not be on the field but in the dressing room. In this video Dasun Shanaka and Mickey Arthur are arguing vigorously on something. When Arthur was seen targeting the captain about something, Dasun Shanaka was seen trying his best to convince him from his side. After this, Mickey Arthur was seen going out of the field with a smile.

Chahar and Surya are the heroes of Team India’s victory

In the match, Sri Lankan captain Dasun Shanaka won the toss and elected to bat first. The team scored 275 runs for the loss of 9 wickets in the game of 50 overs. The Indian team lost 7 wickets with five balls remaining and won this match by three wickets. However, at one time the seven wickets of Team India had fallen for 193 runs and from here the team seemed to be moving towards defeat. But after this there was an unbroken partnership of 84 runs for the eighth wicket between Deepak Chahar and Bhuvneshwar Kumar. In this, Bhuvneshwar Kumar scored an unbeaten 19 runs. At the same time, 69 runs came off 82 balls from Chahar’s bat. It included seven fours and a six. This was Chahar’s fifth ODI match. Earlier, in the bowler too, Chahar showed amazing and took two wickets for 53 runs in the bowling of eight overs.