IND vs SL: Sri Lanka could not fly again in front of Team India, set a target of 276 runs for victory 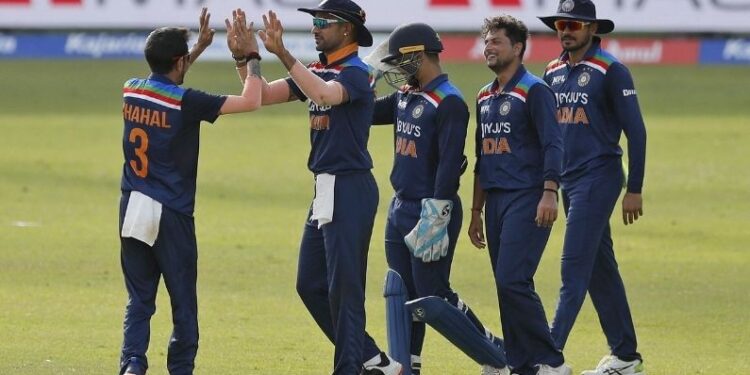 IND vs SL: In the second ODI also, Sri Lankan captain Dasun Shanka won the toss and elected to bat first. The Indian team has landed in this match without any change.

India has got a target of 276 runs from Sri Lanka to win in the second ODI. Batting first, the hosts scored 275 for nine with half-centuries from Charit Aslanka (65) and Avishka Fernando (50) as well as an unbeaten 44 from Chamika Karunaratne in the last over. Yuzvendra Chahal and Bhuvneshwar Kumar were the most successful bowlers for India, who took three wickets each. Apart from him, Deepak Chahar took two wickets. Team India’s bowlers once again bowled well and did not allow Sri Lanka to reach the big score. India lead 1-0 in the three-match series. He won the first match by seven wickets. India will capture the ODI series as soon as they win this match.

Batting first, Sri Lanka got off to a good start. Avishka Fernando and Minod Bhanuka put on 77 runs for the first wicket as India craved wickets in the first 10 overs of the powerplay. Both of them faced the Indian fast bowling pair of Deepak Chahar and Bhuvneshwar Kumar very well. But like in the first match, Sri Lanka’s batting faltered as soon as India’s spinners came on the front. Yuzvendra Chahal first dismissed Minod Bhanuka (36). After playing an innings adorned with six fours, Bhanuka was caught by Manish Pandey. On the very next ball, Bhanuka Rajapaksa went on without opening an account. A brilliant ball from Chahal made him a victim. Ishan Kishan took a brilliant catch behind the wicket. In this way Sri Lanka’s score became 77 for two without loss from 77 runs.

After this the run-rate in the Sri Lankan innings came to a halt. Kuldeep Yadav, Chahal and Krunal Pandya together made the Sri Lankan batsmen struggle for runs. During this, Fernando and Dhananjay de Silva took Sri Lanka’s score beyond 100 runs. Avishka Fernando completed his half-century during this period, but after crossing the 50-run mark, he was dismissed after playing a weak shot off Bhuvneshwar Kumar. He was caught by Krunal Pandya. He scored 50 runs in 71 balls with four fours and a six. After some time, Deepak Chahar made Dhananjay walk. He scored 32 runs in 45 balls with a four. Captain Dasun Shanka became Chahal’s third victim after scoring 16 runs and got bowled. On the other hand, Wanindu Hasaranga scored eight runs and was bowled by Deepak Chahar.

After the fall of six wickets for 184 runs, Charit Aslanka along with Chamika Karunaratne added 50 runs and took the team to 250 runs. During this Aslanka completed her half-century. He became Bhuvi’s second victim as the seventh wicket after scoring 65 off 68 balls with six fours. Chamika Karunaratne once again scored runs in the last over. He played an innings of 44 not out in 33 balls with the help of five fours.

read this also: Sri Lankan cricketer became pauper between IND vs SL series! There is no money to repay the loan, the players are postponing marriages