IND vs SL: Prithvi Shaw injured after being hit on the head, said after the match – became numb, was not clearly visible 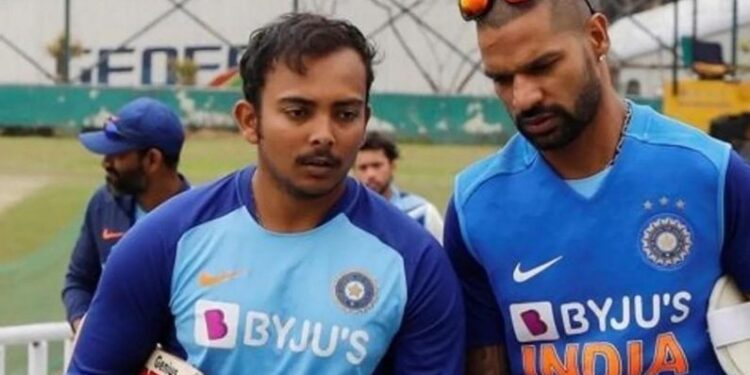 Prithvi Shaw scored 43 runs in 24 balls with nine fours in the first ODI. He along with captain Shikhar Dhawan gave India a stormy start of 58 runs.

Prithvi Shaw was hit on the head in the first ODI against Sri Lanka.

India’s young opener Prithvi Shaw batted vigorously in the first ODI against Sri Lanka. But during this the ball hit his helmet and he was soon out after that. After the match, Prithvi Shaw revealed that he was numb for a while after being hit by the ball. They could not even see clearly. He should have left the field. Shaw scored 43 runs in 24 balls with nine fours in the first ODI. He along with captain Shikhar Dhawan gave India a stormy start of 58 runs. The manner in which he batted during the first five overs had decided both India’s victory and the way of victory. Team India won the first ODI by seven wickets with 80 balls remaining. Batting first, Sri Lanka had scored 262 runs for nine wickets. In response, India won the match by scoring 263 runs for three wickets.

Prithvi Shaw was adjudged man of the match for his batting. On the question of the ball hitting the helmet in the post match presentation, he said, ‘I am fine now. It’s a bit painful but it’s okay. After the ball was hit, it was a little numb and was not clearly visible. The focus was lost after the ball hit the head. I should have left the crease. From now on I will take care. Nowadays a concussion test is necessary after the ball hits the helmet. Under this, the physio examines the player and if he has any problem then he can withdraw from the match.

ICC regulations also allow for concussion replacement. But during the match against Sri Lanka, Shaw had proved himself right during the physio’s examination and decided to continue batting. He was hurt in the fifth over by Dushmanta Chamira’s ball.

Prithvi was disappointed to be out

After this injury, he played the delivery of Dhananjay de Silva and was out. His wicket fell while trying to play a big shot. In this regard, Shaw said that he was very disappointed with the kind of shot he got out. But after the ball hit the head, the focus was lost. On the question of stormy batting, he said, ‘I went thinking something and was looking for the boundary. As a batsman, I want to keep the scoreboard running. The pitch was good in the first innings and it got better in the second innings. And I like to face fast bowlers.