IND vs SL: Dhawan will carry out the special mission of Kohli-Shastri, will hit two targets with one arrow in Sri Lanka 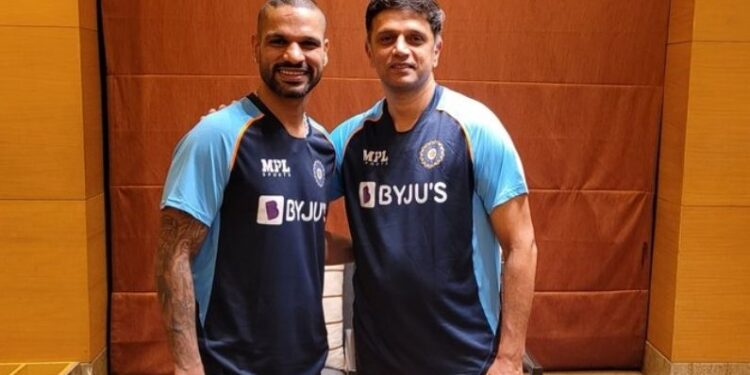 Shikhar Dhawan is captaining the Indian team for the first time and under his leadership, the Indian team will play 3 ODIs and only 3 T20 matches against Sri Lanka, starting on Sunday 18 July.

Under the leadership of Shikhar Dhawan and Rahul Dravid, the Indian team will play in Sri Lanka.

The ODI series between India and Sri Lanka is starting from Sunday, July 18 in Colombo. Along with this, the examination of this special team of limited overs filled with some experienced and many youngsters will also start. The result of this examination will come in the next few days, but the real eyes are elsewhere. Even sitting in England away from Sri Lanka, the eyes of captain Virat Kohli and coach Ravi Shastri will be on this series, because their special mission will be carried out in this series. Shikhar Dhawan and Rahul Dravid will do this work. In the absence of Kohli and Shastri, these two veterans are commanding Team India in Sri Lanka and Dhawan has also disclosed this mission.

This mission is to keep an eye on the right players for the ICC T20 World Cup 2021. In this tour of Sri Lanka, there are many such players in Team India, who will stake claim to make their place in the team for the World Cup this year. In such a situation, this is the biggest chance of audition in the last international series before the World Cup and Dhawan has said that the players who will be eyeing Kohli and Shastri will be taken care of in this series.

Work will be done keeping in mind the T20 World Cup

Team captain Dhawan also talked about this issue in a virtual press conference on Saturday 17 July. He told that he has not had such a talk with Kohli or Shastri, but coach Dravid would know about it. Dhawan said, “I have not had any specific discussion with Virat or Ravi bhai. But I am sure he must have discussed something with Rahul bhai and the selectors and I am sure we will be conveyed this message. Whoever plays in this series will keep the T20 World Cup in mind.

To kill two birds with a stone

India has to play 3 T20 matches in addition to 3 ODIs in this series. Through this, the Indian team will hit two targets with one arrow. One, she will be able to test her bench strength properly and try to win the series. The right players will be identified for the second T20 World Cup, as this is the last international series before the T20 World Cup. After this, the Indian players will only enter the remaining part of IPL 2021 and from there they will directly start their campaign for the T20 World Cup. The World Cup will start in UAE and Oman from October 17, which will run till November 14. In the Super-12 stage, India is with Pakistan in Group-2.

Also read: Ind vs SL: Captain Shikhar Dhawan told this fight going on in the Indian team, said this on Arjuna Ranatunga’s statement