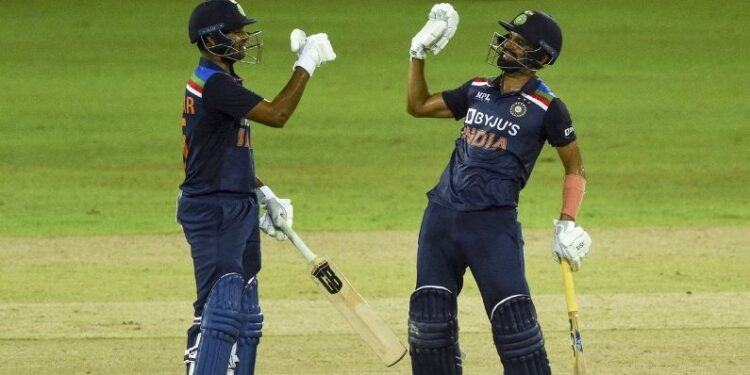 Deepak Chahar and Bhuvneshwar Kumar shared an 84-run stand in the second ODI to give India a three-wicket win against Sri Lanka to give them an unassailable 2-0 lead in the series.

The Indian cricket team on Tuesday named R. In the second ODI played at Premadasa Stadium, Sri Lanka defeated Sri Lanka by three wickets. India kept losing in this match. Chasing the target of 276 runs, India lost their seven wickets for 193 runs. From here, India had three wickets left and the pair of Deepak Chahar-Bhubaneswar Kumar was on the crease. The pair made an excellent partnership of 84 runs to win the team. By winning this match, India took an unassailable 2-0 lead. India is very happy with this spectacular victory, but this victory has also brought back memories of an old victory, which was found in Sri Lanka in a similar fashion.

This victory came in 2017. And one thing in common between the two victories is Bhuvneshwar Kumar. Bhuvneshwar scored an unbeaten 19 runs in this match and gave the team victory with a half-century partnership with Deepak Chahar. In the match played in 2017, Bhuvneshwar had won the team by making a similar partnership. Yes, there are two big differences between these two victories. At that time, the world’s well-known finisher Mahendra Singh Dhoni was with Bhuvneshwar and the second difference is that Bhuvneshwar has played the role of an ally in this match, but in that match he became the architect of victory by scoring a half-century. There is one more similarity between these two matches. India won both the matches by three wickets. Both Dhoni and Chahar play for Chennai Super Kings in IPL.

Had a partnership of 100 runs with Dhoni

That match between India and Sri Lanka was played on 24 August 2017 at Pallekal Stadium. Batting first, Sri Lanka scored 236 runs for eight wickets. Shikhar Dhawan (49) and Rohit Sharma (54) gave the team a strong start. But then the team kept losing wickets continuously and the crisis of defeat started looming on it. The team had lost its seven wickets for 131 runs. From here Dhoni and Bhuvneshwar took the lead and gave the team victory. Surprisingly, Bhuvneshwar had scored more runs than Dhoni. In this match, Bhuvneshwar played an unbeaten 53 runs in 80 balls with the help of four fours and a six and Dhoni scored 45 not out off 68 balls with the help of just one four. India won this match by three wickets under the Duckworth-Lewis rule.

performed the role of a supporter

Something similar was the situation in front of India again on Tuesday. He had lost the wickets of all his main batsmen. The burden of victory was on Chahar and Bhuvneshwar. Chances were looking less but this pair did not lose courage and stood till the end and led the team to victory. India lost their seven wickets for 193 runs. From here Bhuvneshwar supported Chahar. In this match, he kept supporting Chahar and kept giving him strike. Deepak extended his innings with the support of Bhuvneshwar and scored the first half-century of his ODI career, giving the team a spectacular victory.

Bangladesh made a splash in ODIs on the strength of the captain, made the target of 298 runs a toy, eliminated the opposing team