IND vs NZ: Will big players get rest in Indore? Playing XI can be like this 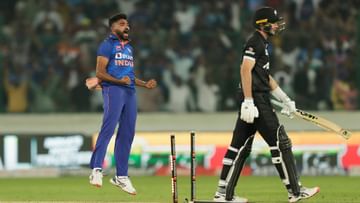 IND Vs NZ, 3rd ODI Match Prediction Squads: The Indian team has already taken a 2-0 lead in the series. In such a situation, the team can make some big changes in the last ODI.

Indian team is well ahead in the series against New Zealand

Indian team also has to play three T20 matches series against New Zealand after ODI. After this, the series of important four Test matches against Australia will start. Keeping this in mind, the board can give rest to its top players in the last ODI.

Big players can be given rest

It is being claimed in many media reports that players like Virat Kohli and Hardik Pandya can be given rest. In his place, some new faces can be seen in the playing eleven. The biggest name among them is Rajat Patidar. If Ishan Kishan is made to open by resting young batsman Shubman Gill, then Rajat Patidar can appear in the middle order. The chances of making Rajat’s debut are very high. At the same time, all-rounder Shahbaz Ahmed can get a chance in place of Hardik Pandya. Yuzvendra Chahal can be included in the team in place of Kuldeep Yadav, who played in the first two ODIs. There are also hopes of Umran Malik playing.

New Zealand is missing former captain Kane Williamson in batting. There can be a change in the batting of the team because till now no Kiwi batsman has been able to do well except Bracewell. At the same time, the bowlers were also thrashed fiercely. Kiwi team has to avoid the danger of clean sweep. In such a situation, he will give a chance to his best team.