IND vs NZ: Shardul Thakur will get a chance in Hyderabad, Rohit gave the reason 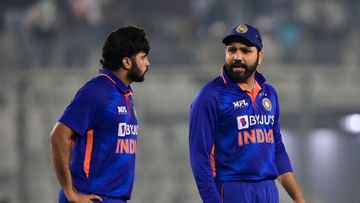 Indian captain Rohit Sharma told that before the ODI World Cup to be held this year, the team wants to use every method.

Will Shardul Thakur get a chance in the ODI series?

The Indian team has not won the World Cup title since 2011. This time the World Cup will once again be held in India. BCCI He is fully engaged in the preparations for this World Cup. Every ODI series is being seen as this preparation. Team India has to play ODI series against New Zealand from Wednesday. Shardul Thakur has been given a place in the team for this series. Although Shardul’s ODI records are not very good. Rohit told this on Tuesday evening and also indicated that Shardul played the first ODI in Hyderabad.

Mohammed Siraj, Mohammed Shami and Umran Malik were India’s favorite fast bowling trio against Sri Lanka. If you include leg-spinner Yuzvendra Chahal in the playing XI with him, then India’s lower order becomes very long. Rohit said that Shardul Thakur has been brought back into the team to sort out the issue but it is one of the areas the team needs to work on ahead of the World Cup.

Asked about playing seven batsmen and four specialist bowlers, he said, “To be honest, I don’t want to compromise on anything.” Rohit said, you want to feed your best XI. Number eight and nine are going to be a challenge for us, someone who can bat down that order. That’s why we included Shardul in the team. He can benefit us at number eight.

We will play all over India (during the World Cup) under different conditions. We need to assess everything. Can we play with three spinners? Luckily we have spinners who can bat – Akshar, Vaishi (Washington Sundar), Shahbaz and Jaddu (Ravindra Jadeja). Referring to Chahal and Kuldeep Yadav, the Indian captain said, “These are players who can give us the depth we are looking for, but the two-tier wrist spinners should not be forgotten.”