IND vs NZ: Shardul Thakur is the magician of Team India, did wonders in 370 days 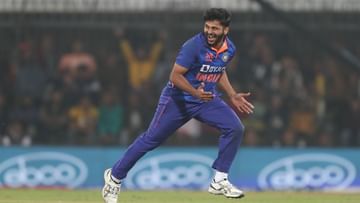 Shardul Thakur gave away 14 runs in his first over against New Zealand, but after that he showed his magic and gave India a big win.

Indian captain Rohit Sharma and Shubman Gill both scored centuries in the third ODI against New Zealand. There was a big partnership of 212 runs between the two. On the basis of this wonderful innings, India was successful in giving New Zealand a target of 386 runs. In response to which the Kiwi team was reduced to 295 runs. Rohit and Gill played big innings, but neither Rohit nor Gill could become the player of the match. Shardul Thakur was the player of the match. Who took 3 wickets for 45 runs in the third ODI. Also scored 25 runs.

After the victory, the Indian captain told that everyone in the team calls Shardul a magician because he has been doing wonders for some time now. Shardul also completed his 50 ODI wickets in the third ODI and his 50 wickets are proof that he is a magician. He achieved this feat in 34 ODIs.

2 victims in a single over

Thakur’s magic was amazing that he gave away 14 runs in his first over in the third ODI. Rohit also reprimanded him for the line length during the match. After this he took 3 wickets. He caught Darrell Mitchell and Tom Latham in the same over. Team India’s magician got Latham out for a golden duck. Glenn Phillips also became a victim of Thakur.

28 wickets taken in a year

Bedam Thakur did these three batsmen who had the power to create trouble for India. His 3 wickets had almost decided India’s victory in the third ODI. Thakur, who made his ODI debut against Sri Lanka in 2017, returned to Team India on January 19 last year and has been wreaking havoc with both bat and ball since then. He has played 19 ODIs since 2022, in which he took a total of 28 wickets and scored a half-century. During this, he has taken 3 or more wickets in a match 4 times.