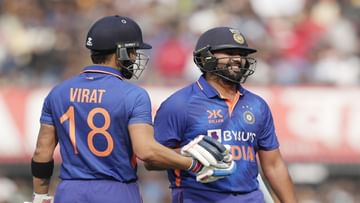 India had given a target of 386 runs to New Zealand

India has badly washed New Zealand in the 3 match ODI series. After Hyderabad, Raipur, Rohit Sharma’s team beat New Zealand in Indore as well. India won the third ODI by 90 runs. With this, they have also made a clean sweep in the series. While batting first, the Indian team gave a mountain-like target of 386 runs to the guests. In response, the Kiwi team was shaken in front of the Indian attack and the entire team was reduced to 295 runs in 41.2 overs.

With this, India has become the number one ODI team in the world. The heroes of India’s victory were not one but 4. Rohit Sharma, Shubman Gill created a ruckus with the bat, while Shardul Thakur and Kuldeep Yadav wreaked havoc with the ball. India made a clean sweep of New Zealand in the ODI series for the first time in 13 years.

Earlier, India made a strong start while batting first. Both Rohit Sharma and Shubman Gill shared a 212-run partnership while scoring centuries. India got the first blow in the form of captain Rohit. He scored 101 runs. Gill’s rhythm also deteriorated as soon as the partnership with the captain broke. On the score of 230 runs, India got the second blow in the form of Gill. He played an amazing inning of 112 runs, India faltered due to the dismissal of both the openers. Ishaan Kishan scored 17 runs, Virat Kohli 36 runs, Suryakumar Yadav could score only 14 runs.

Pandya rained with ball and bat

New Zealand could not complete even 50 overs

After the first blow, opener Devon Conway froze at one end, but the Indian bowlers started thrashing the visitors from the other end and did not allow New Zealand to play even the full 50 overs. Thakur and Kuldeep took 33 wickets. Yuzvendra Chahal got 2 and Pandya and Umran Malik got 1-1 success. Conway scored the maximum 138 runs from New Zealand.