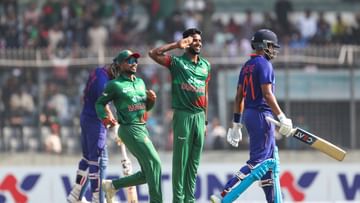 Bangladesh captain Liton Das chose to bowl after winning the toss in this match and his bowlers especially Shakib Al Hasan proved the captain’s decision right.

On the basis of the brilliant bowling of Shakib Al Hasan, Bangladesh did not allow the Indian team to score big in the first ODI being played at the Sher-e-Bangla Stadium in Mirpur. The Indian team was bundled out for 186 runs in 41.1 overs in this match. If any batsman fought for India, then it was KL Rahul. Rahul batted at number-5 in this match and scored a half-century. Shakib destroyed the lower order of Team India and took five wickets.

In this match, Liton Das, captaining Bangladesh, won the toss and decided to bowl first, which proved to be correct. Team India did not get a good start. Shikhar Dhawan (7) and Rohit Sharma returned to the pavilion after scoring 27 runs. Shakib made Virat Kohli his first victim. Kohli could score only nine runs. Rahul scored 73 runs in 70 balls. His innings included five fours and four sixes.

Sundar and Rahul handled for some time

India’s score was 49 runs for three wickets. Meanwhile, a partnership seemed to be forming between Shreyas Iyer and Rahul, but on a total score of 92, Ibadat Hussain ended Iyer’s innings of 24 runs off 39 balls. After this Washington Sundar supported Rahul. Both shared a partnership of 60 runs. Sundar tried to play a reverse sweep off Shakib’s ball but was caught by Hussain. Sundar scored 19 runs in 43 balls.

After this, Shakib took a series of wickets. They did not even allow Shahbaz Ahmed to open an account. Shardul Thakur (2) also became the victim of Shakib. Shakib did not allow Deepak Chahar to open his account either.

Team India’s score was 156 runs losing eight wickets in 34.4 overs. From here, the end of Team India’s innings could have happened at any time, in such a situation, Rahul started scoring runs fast. He was trying to do the same. In this effort, he also lost his wicket. Ibadat Hussain ended his innings on the fifth ball of the 40th over. Rahul will surely regret his dismissal because if he had stayed till the end, he would have scored a century and would have taken Team India to a big score. Rahul returned to the pavilion as India’s ninth wicket. After this, Hussain ended the Indian innings by dismissing Mohammad Siraj. Siraj returned to the pavilion after scoring nine runs. Kuldeep Sen remained unbeaten after scoring two runs.