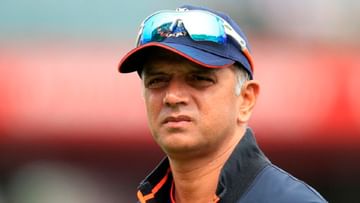 Rahul Dravid gave a wonderful excuse after the defeat

The first ODI against Bangladesh was lost by 1 wicket and Team India lost the second match by 5 runs. As a result the series slipped out of hand. No one would have thought that equipped with legendary batsmen like Virat Kohli, Rohit Sharma, KL Rahul Team India ODI series will be lost. There is no doubt that Bangladesh played excellent cricket but Team India also did not leave any shortage of mistakes. However, head coach Rahul Dravid believes that Team India lost the series due to not having a full strength team.

Rahul Dravid said in the press conference held after the second ODI, ‘From our point of view, it has not been so easy to play. We didn’t have the full team. We hope that from January we will get the full team to play in the home series, but it will depend on the injuries.

Rahul Dravid said that before IPL, Team India has to play nine ODIs. Three ODIs are to be played against New Zealand, Sri Lanka and Australia. Dravid is hopeful that he will get a stable team for these three series. Indian team head coach Rahul Dravid believes that from January onwards, there is every possibility that India will have a full strength ODI team which will play continuously in the next eight-nine months till the World Cup to be held in October-November.

It is not easy to adapt to the ODI format!

India’s ODI performance has been disappointing, including back-to-back series losses against New Zealand and Bangladesh. In this, a very different team was fielded due to workload management. He said, ‘In the last two years, we were giving a lot of priority to T20 because two World Cups were to be played. In the next eight-ten months, our priority will be ODI cricket. And it is not so easy to adapt to every format.


Many big players of India are injured

Please tell that Indian team captain Rohit Sharma is injured. Deepak Chahar, Kuldeep Sen have also been ruled out of Bangladesh tour due to injury. Before this, Jasprit Bumrah, Ravindra Jadeja are also injured. Rishabh Pant is also not fully fit. Mohammed Shami is also struggling with injury. Now it remains to be seen how long these important players can be fit.