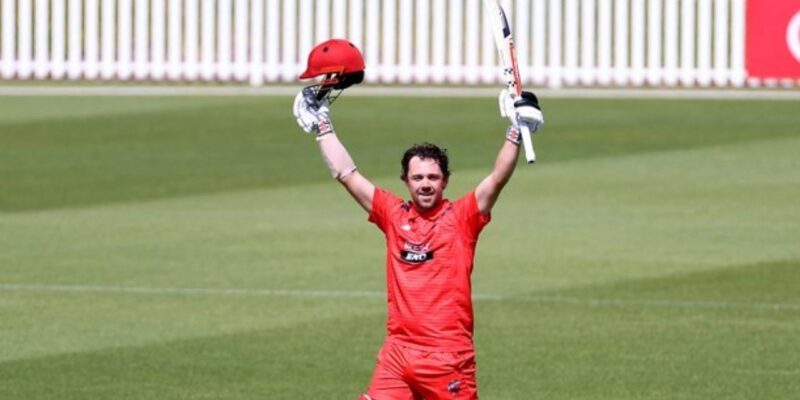 It has become common practice to score double centuries even in 50 overs cricket. In Australia’s domestic cricket, a cricketer named Travis Head has done this wonder. He scored 230 runs in just 127 balls in the tournament named Marsh Cup. South Australia team captain Travis Head hit 28 fours and eight sixes in his innings. Due to this, his team scored a huge score of 391 runs for eight wickets in the match of 48 overs. Apart from Travis Head, Jack Witherald played an innings of 97 runs. Talking about the bowlers of the opposition team Queensland, everyone was beaten up. But Indian-origin Gurinder Sandhu was the most successful who took four wickets for 73 runs in 10 overs. South Australia’s innings completely depended on Travis Head. If his runs were removed, the rest of the batsmen could not do much.

South Australia won the toss and elected to bat. But the opener lost Alex Carey (12) in the fourth over. Then Captain Travis went to head batting. After this, the evening came for the bowlers of Queensland. Left-handed batsman Travis Head shared a 244-run partnership for the second wicket with Jack Witherald. This pair was broken in the 36th over and the bowler who broke it was Gurinder Sandhu. Jack Witherald was caught by Usman Khawaja just three runs before the century. He hit eight fours and three sixes in his innings. Although his innings was quite good, but it can be called slow batting in front of Travis Head, who is raining runs at the other end.

It seemed that South Australia would cross 400 runs. But this could not happen. The team lost six wickets in the last 36 runs. Due to this, the team could only reach 391 runs for eight wickets.

read this also: Chris Gayle lashed out at the legend of his own country, said – go and say, I do not respect him