If you tease Virat, he will not leave, King Kohli did wonders by entering the special team 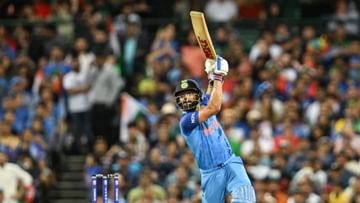 Virat Kohli was struggling for runs for almost three years and did not score a century with his bat, but the form that this batsman has achieved since July 2022 is worth watching.

Virat Kohli got a place in the ICC T20 team.

The second half of the year 2022 was great for Virat Kohli. In this half, Virat returned to his old colors and then took the form for which he was known. Before this, Virat’s bat was silent for three years. There were also questions about his stay in the team, but this batsman came back and performed in such a way that the ICC has given him a place in its T20 team of the year 2022. Many veterans had told Virat not to be eligible to be selected in Team India for the T20 World Cup. But Virat did not give up and kept doing his work quietly.

Virat has scored a lot of runs in T20 since July 2022. Before this, a century did not come out of his bat for three years. But Virat scored a brilliant century against Afghanistan in the Asia Cup-2022. This was the 71st century of his international career, which was waiting since 2019. This was also the first T20 century of his career. This was the only match from where Virat started returning to his old colors.

Virat did not turn back again

After Virat scored a century against Afghanistan, Virat did not look back. From here he went on adding new dimensions to his game. He was the highest run scorer for India in the Asia Cup. After this the next big tournament was the ICC T20 World Cup-2022. Team India needed Virat Roop in this tournament, which Kohli showed in the very first match. India’s first match was against its arch rival Pakistan. Team India was in danger of defeat, but Virat played that innings, which veterans have termed as the best innings of T20. Virat made India win on the basis of his bat from where no one had imagined.

In this match, the six that Kohli hit on the front side off Haris Rauf was included in the best shots of T20 by the ICC. Kohli played an unbeaten inning of 82 runs against Pakistan. Kohli scored four half-centuries in this World Cup. 296 runs came out of Kohli’s bat in six matches. He was the highest run scorer in the tournament.

No batsman in the world could match the batting that Kohli showed in five months and the ICC also accepted his iron. The ICC has given Kohli a place in its T20 team of the year 2022. He is the first player whom the ICC has given a place in its team of all three formats on different occasions. Virat has continued this rhythm till now in the new year and is raining runs in a stormy manner.