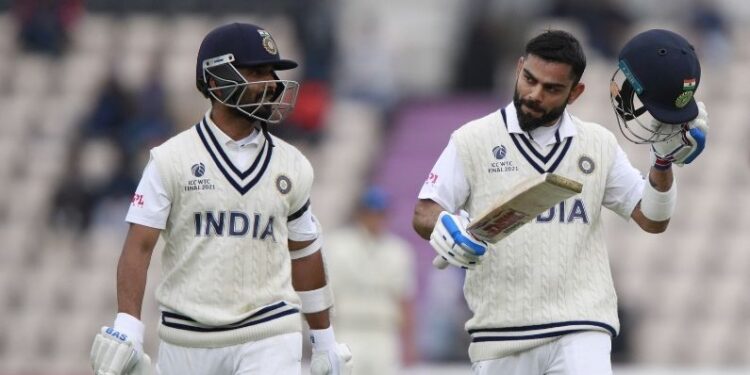 ICC WTC Final 2021: In the final match, India did not make any changes in the team selected two days ago while New Zealand landed with five fast bowlers.

The second day of the ICC World Test Championship Final between India and New Zealand was affected by poor lighting. Due to this only 64.4 overs could be played. During this, the Indian batsmen showed a good game. By the time the game was stopped, India had scored 146 runs for three wickets. Captain Virat Kohli (Virat Kohli) 44 and vice-captain Ajinkya Rahane remained unbeaten on 29 runs. There was an unbroken partnership of 58 runs for the fourth wicket between the two. The umpires, after assessing the lighting conditions, declared the end of the day’s play at 10:40 PM IST (6:10 PM local time). Kohli went to the crease in the first session itself as the Indian team had lost the wickets of Rohit Sharma (34 off 68 balls) and Shubman Gill (28 runs in 64 balls) before lunch, batting first after losing the toss. Both of them shared a 62-run partnership for the first wicket but they returned to the pavilion within one run.

Rahane stepped into the crease in the second session after being dismissed leg before by Cheteshwar Pujara (8 off 54 balls) on an inswinger by Trent Boult (1 for 32). The first day’s play could not take place due to rain. On the second day, the weather did not disturb the first session, but due to bad light, the tea break had to be taken early and in the third session, the bad light was the subject of discussion. On one occasion in between, both the captains were also unhappy with the decision of the umpires. India had scored two wickets for 69 runs in the first session but in the second session, they could only add 51 runs in 27.3 overs and the biggest reason for this was the extremely disciplined bowling of the Kiwi bowlers. Even Kohli gave him full respect and even he played three consecutive over maiden of Colin de Grandhomme.

On the other hand, Pujara opened his account off 36 balls but his boundary with a cut shot on Neil Wagner (1 for 28) was visible. Wagner’s bouncer also hit Pujara’s helmet and soon after he was dismissed leg before by left-arm fast bowler Boult.

Kohli showed his commitment and perseverance well and waited for loose deliveries to play the shot. Rahane also followed his captain but he also made some catchy shots. Rahane has hit four boundaries so far while Kohli has only once hit the ball to the boundary. Earlier, Rohit and Gill, who opened the innings in the first innings Test matches in England, came to the crease with a clear strategy and implemented it well in front of Boult and Tim Southee.

Rohit played with an open stance to tackle Boult’s inswinger while Gill stood a little outside his crease to get past Southee’s outswinger. Gill pulled the ball of Boult and hit the first four for India. After which Rohit hit two fours on Saudi. Gill welcomed Kyle Jamieson (1 for 14) by sending his in-swinger for four runs. There was no maiden in the first 11 overs but no runs were scored in the next three overs.

Jamieson’s short pitch ball also hit the grille of Gill’s helmet. This fast bowler finally gave New Zealand the first success by dismissing Rohit. Saudi took his brilliant catch at third slip. Rohit was in a state of confusion about playing the shot, which benefited the bowler and the Kiwi team. In his first over, Wagner got Gill caught by wicketkeeper BJ Watling on the ball taking an angle. New Zealand captain Kane Williamson showed no hesitation in deciding to field first, given the chilly weather and cloudy skies at the Hampshire Ball after the first day of rain.

India did not make any changes in the team selected two days ago while New Zealand landed with four fast bowlers. He has fifth fast bowler all-rounder de Grandhomme. Meaning New Zealand did not keep any spinner in the playing XI.