How will New Zealand stop the one who scored 2 centuries? Kiwi team’s ‘Virat Plan’ ready 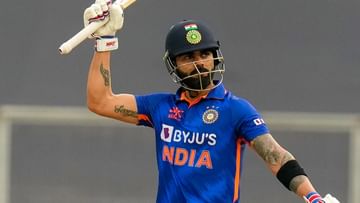 Virat Kohli recently batted brilliantly in the ODI series played against Sri Lanka and scored centuries in two of the three matches.

Virat Kohli has returned to his old colors.

Virat Kohli was not in form for three years. They were struggling for runs. But now this veteran has returned to his form. Virat is in his old colors. Virat scored centuries in two matches of the recently concluded three-match ODI series against Sri Lanka. Now India has to play series against New Zealand from Wednesday and everyone’s eyes are on Kohli in this series. Tom Latham, who was appointed captain of New Zealand in this ODI series, has said that he has prepared a plan for Kohli.

Kohli scored a century against Afghanistan in the Asia Cup-2022 last year, which was his first century in T20. With this century, Kohli ended the drought of three years at the international level. After this, Kohli is showering runs.

Virat Kohli has returned to form and scored three hundreds in the last four ODIs but Latham said the team has plans in place for India’s star batsman. Latham said in the press conference before the first match on Tuesday, “Virat is playing very good cricket. Looks like he is hitting the ball well. We need to plan the best. We will try to make it as difficult as possible for him (to score runs).

Sodhi will not play the first match

The left-handed batsman said that senior spinner Ish Sodhi has been ruled out of the first ODI due to a minor injury. Sodhi practiced in the nets on Tuesday but didn’t bowl as hard as he usually does. A good player of spin, Latham spent maximum time at the net. Latham said, unfortunately Ish has a minor injury. He will not be available tomorrow but it is expected that he will be available for the next few matches.

these players will be missed

Tom Latham said that New Zealand will miss experienced fast bowlers Tim Southee and Trent Boult but this will give new players an opportunity to take responsibility on the tour of India. Saudi has returned home after a successful tour of Pakistan while Boult is playing in the ILT20 in the UAE after opting out of New Zealand’s central contract. In the batting department, the team will miss regular skipper Kane Williamson. Lockie Ferguson will lead the New Zealand pace attack which also includes Blair Tickner, Doug Bracewell and Henry Shipley.

Latham said, they (Boult, Southee, Williamson) are not in the team and we will miss them. On the other hand, it is an opportunity for other players in the team. All the players in the team have played international cricket which is a bonus. Now it is his turn to take responsibility. Lucky we have Lockie Ferguson who has played a lot of cricket in India.