Hockey World Cup 2023: Only victory will not work, India will have to show its top game 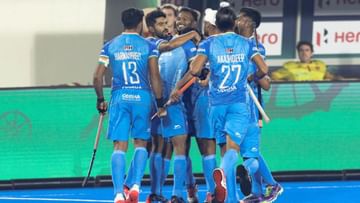 IND Vs Wales Hockey World Cup 2023: The Indian team has not yet made it to the quarterfinals of the Hockey World Cup. Only a big win against Wales can take them to the next round

The Indian hockey team played a draw against England in the last match.

Hockey World Cup 2023: Indian Team FIH Men’s Hockey World Cup I have to play my last pool match against Wales on Thursday. If India has to make a place in the quarterfinals, then it needs not just a win but a huge win in this match. This match will clear the status of Pool D. India and England have four points from two matches with one win and one draw but England are ahead on goal average. England’s goal average is plus five while India’s is plus two. The advantage for India will be that before the match, it will know by how many goals it has to win because the match between England and Spain is before that.

If England loses or draws, then India’s work will be done by winning and it will be at the top of Pool D. With this, he will directly reach the quarter-finals from the group of death. If England defeats Spain, then India will have to win by a margin of at least five goals. This figure will increase according to the margin of victory of England.

How will India reach the quarterfinals

If both the teams have equal number of goals and equal number of wins, then the ranking in the pool stage will be decided on the basis of goal average. Even if India remains in second place, it will not be out of the tournament. In such a situation, he will have to play a crossover with the third place team of Pool C, which can be New Zealand or Malaysia. India played a goalless draw with England after defeating Spain 2-0. After playing two matches at Rourkela’s Birsa Munda Stadium, the team will now play its first match of this World Cup at Kalinga Stadium.

The top team from each of the four pools will directly advance to the quarter-finals while the second and third placed teams will play crossover matches. The second place team of one pool will play the third place team of the other pool and the winning team will play the top team of the pool in the quarter finals. If India qualifies directly by topping Pool D, then it will have to play one match less and the team will be fresh in the last eight. Midfielder and former captain Manpreet Singh said, “If we top the pool, we will play one match less which will be good.” We will try to execute the strategy by showing our best game.

Penalty corners are a matter of concern for India. The Indian team has not been able to score directly from the nine penalty corners received so far. Amit Rohidas scored against Spain but it was off a rebound after Harmanpreet Singh’s drag-flick failed. The drag-flicker and poor form of skipper Harmanpreet, who could not even score a penalty stroke against Spain, remains a matter of concern for India.

Hardik will not be part of the team

India will also have to capitalize on field goal opportunities. Chief coach Graham Reid said, we have to avoid missing the opportunity. We have to win by a huge margin against Wales. India got a jolt before the match as midfielder Hardik Singh will not be able to play this match due to injury. He will be fit only till the crossover or quarter-finals. Vivek Sagar Prasad will play in his place. On the other hand, the team of Wales, having lost both the matches, is out of the tournament and will play only for prestige.