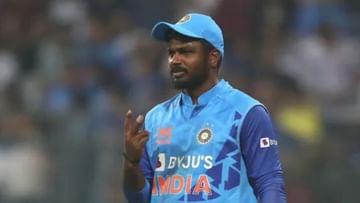 India’s wicket-keeper batsman Sanju Samson was not given a chance in the team for the ODI series against Sri Lanka.

Sanju Samson has no dearth of fans in Kerala

wicket keeper batsman of indian team sanju samson There is absolutely no dearth of fans. Wherever Team India is playing a match, Sanju Samson’s fans definitely reach there. Especially in Kerala. Whether Sanju is on the field or not, the echo of his name is definitely heard in the stadium. Something similar happened on Sunday. In the ODI match being played between India and Sri Lanka, the fans questioned Suryakumar Yadav about the absence of Sanju from the team.

Sanju Samson was not selected in Team India for the ODI series against Sri Lanka. KL Rahul and Ishan Kishan were included in the team as wicketkeepers. In such a situation, when the fans questioned Surya during the match being held in Kerala. Surya won everyone’s heart with his answer.

A video of Sunday’s match is going viral on social media in which Suryakumar was fielding at the boundary. Meanwhile, the fans standing behind him started cheering Sanju-Sanju. Surya turned back and gestured to the fans to ask what they wanted. Then a fan asked, ‘Where is our Sanju?’ Surya then turned back and made a heart with his hands. Seeing this answer of his, there is no place for the happiness of the fans. This is not the first time this has happened. Last time when there was a match in Kerala, someone asked Surya sitting in the team bus about Sanju. Then he showed Sanju’s picture in his phone.

Sanju is not getting a chance

Samson also has a huge fan following on social media. Whenever Sanju is ignored for any series, fans start trolling BCCI on social media. After Sri Lanka, Sanju has not been selected for the ODI series and T20 series against New Zealand. BCCI has not given any clear reason for this. However, it is believed that Sanju Samson was injured during the T20 series against Sri Lanka. For this reason, perhaps Sanju has not been given a chance.