Former Ranji champion did not score 100 runs, 2 bowlers together took a flurry of wickets 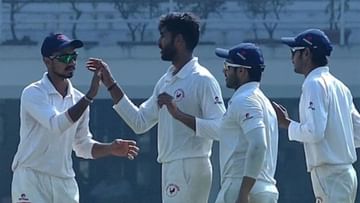 The Vidarbha team, which won the Ranji Trophy title twice in a row, failed miserably in the first innings of the ongoing match with Gujarat.

The next round of India’s domestic tournament Ranji Trophy has started from Tuesday. The former two-time winner has taken a turn for the worse on the very first day itself. Vidarbha’s team is playing against Gujarat in their home. But the Vidarbha team, which won the Ranji Trophy title twice in a row, collapsed cheaply on the first day itself. This team could not even cross 100. Vidarbha’s team got piled on just 74 runs in the first innings.

The two Gujarat bowlers together did not allow the Vidarbha batsmen to gain a foothold in the first innings of the match being played at the Vidarbha Cricket Association Stadium. By the end of the day’s play, Gujarat has scored 188 runs losing five wickets. Gujarat captain Het Patel 14 and Hemang Patel are playing after scoring five runs.

Two Gujarat bowlers, Chintan Gaja and Tejas Patel, together troubled the Vidarbha batsmen fiercely. Both took five wickets each. Vidarbha’s batting was such that only three of its batsmen could reach double digits. Sanjay Raghunath scored the most runs for the team. He scored an inning of 33 runs in 61 balls with the help of five fours. Apart from him, Jitesh Sharma scored 10 runs. Aditya Sarwate played an inning of 17 runs.

Five batsmen of Vidarbha could not even open their account. Two batsmen could score only 1-1 runs. Nachiket Bhute could not go beyond four runs. Hemang and Siddharth Desai also bowled for Gujarat but both of them could not get wickets.

Vidarbha made a comeback

Gujarat got a chance to play its first innings on the very first day itself. However, the team also got an initial setback. The team got the first blow in the form of Priyesh Patel on a total score of 10, who could not even open the account. After this, however, Arya Desai and Bhargav Merai made a good partnership. Both of them added 117 runs for the second wicket. Bhargava was dismissed by Sarvate on a personal score of 40 runs. Desai was also dismissed on a total score of 140. He could not complete the century. Sarwate did not allow Desai to complete his century. Desai scored 88 runs in 114 balls with the help of 14 fours.

In the last session of the day, Vidarbha made a comeback and kept half of the Gujarat team in the pavilion by taking consecutive wickets. Manan Hingrajiya (13), Umang Kumar (19) returned to the pavilion early. Sarwate took three wickets for Vidarbha. Yash Thakur and Akshay Waghre took one wicket each.