First hit with the bat, then did heart-winning work, Rituraj became the hero of Maharashtra 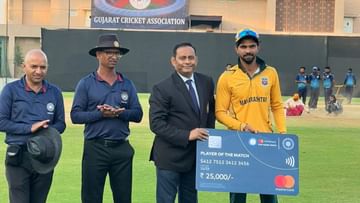 Rituraj Gaikwad played an important role in Maharashtra’s victory by scoring a double century with his brilliant batting and then did a heart-winning job.

Rituraj Gaikwad showed his bat prowess on Monday. This right-handed batsman batted brilliantly in the Vijay Hazare Trophy and made a record by raining sixes. He hit seven sixes in seven balls. With this innings, he got praise from many people. On the basis of his performance, the Maharashtra team defeated Uttar Pradesh by 58 runs and made it to the semi-finals.

Gaikwad made headlines with this innings, but at the same time, after the match, he did such a thing that everyone is praising. Gaikwad scored 220 runs in 159 balls. On the basis of his innings, Maharashtra scored 330 runs in front of which Uttar Pradesh team lost the match by scoring 272 runs. Maharashtra will face Assam in the semi-finals on Wednesday, which defeated Jammu and Kashmir.

Gaikwad gave his award to the young player

In the quarterfinal match, Gaikwad scored 43 runs in one over with the help of seven sixes. After this brilliant inning, Gaikwad was adjudged the player of the match, but the Maharashtra captain handed over his award to young fast bowler Rajvardhan Hengrekar. Rajvardhan, who was part of India’s Under-19 World Cup triumph, took five wickets for 53 runs in 10 overs.

Gaikwad created a new List A record by hitting seven consecutive sixes in the 49th over of the innings off Uttar Pradesh left-arm spinner Shiva Singh. One ball was no ball. Earlier in the Ford Trophy in 2018, Brett Hampton and Joe Carter from Northern Districts scored so many runs in the over of Willem Ludik of Central Districts. Shiva Singh’s first ball was a low full toss on which Gaikwad hit a six over midwicket. He hit a straight six on the second ball while sent the third ball over deep square leg for six runs.

The fourth ball was declared long off while the fifth ball was also sent in the same direction for a six. Gaikwad then took full advantage of the free hit and hit a six over long on on the sixth ball. On the seventh and last ball, he hit a six over deep midwicket. Gaikwad hit 16 sixes and 10 fours in his innings. Apart from him, other Maharashtra batsmen scored only 96 runs in 142 balls.

Such was the innings of Uttar Pradesh

This team will compete in the semi-finals