FIH Pro League: Spain beat Indian women’s team 4-3, 35 seconds before the end of the match, the goal was heavy 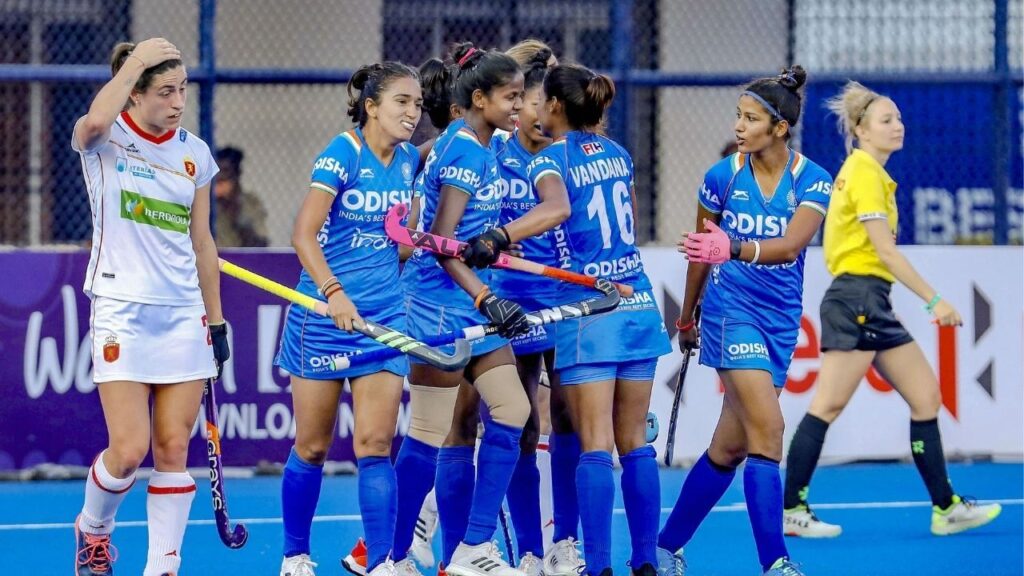 This was the first loss for the Indian women’s hockey team in four matches while Spain registered their first win in the FIH Pro League.

Indian women’s hockey team (Indian Women’s Hockey Team) lost a goal in the end to help him win the tournament in Spain at the Kalinga Stadium on Sunday.Spain Women’s Hockey Team) who suffered a 3-4 defeat against the FIH Pro League (FIH Pro Hockey League) in his first defeat. World No. 9 India had earlier on Saturday defeated Spain, which is ranked sixth in the world rankings, in the first match of the two matches. When the match ended with just 35 seconds left, Jantal Jine scored the winning goal for Spain. Earlier, Begona Garcia (fourth) and Belen Iglesias (24th minute) scored the field goal while Mielán García scored from a penalty corner in the 15th minute.

Sangita Kumari, making her debut for India, scored in the 10th minute, Salima Tete in the 22nd and Namita Toppo in the 49th minute. This is India’s first loss in four matches while Spain registered their first win in the FIH Pro League. India defeated China 7-1 and 2-1 in the opening two matches in Muscat, Oman earlier this month. The Spanish team surprised India in the fourth minute when the ball went wide from Begona Garcia’s brilliant ‘touch’, reaching the goal.

India equalized six minutes later with a brilliant goal from debutant Sangeeta Kumari, who single-handedly took the ball past the Spanish defenders and scored in the net. Spain again got two consecutive penalty corners which were well defended by the Indians. Spain regained their lead in the last minute of the first quarter when Mielán García scored a brilliant goal on deflection from a penalty corner.

India attacked in the second quarter

In the second quarter, India continued to build pressure and the opponent team’s ‘D’ made several attacks but the players missed the goal. However, Salima Tete leveled India in the 22nd minute. Taking an angle while dribbling with the ball, she reached the goal from the middle and made the team 2-2. However, India’s happiness lasted only two minutes as Spain took the lead with a brilliant field goal from Belen Iglesias to finish the first half 3-2.

Savita saved in the third quarter

Even after changing the ends, the match continued at the same pace in which both the teams kept attacking each other’s defense. Spain had a great opportunity to take the lead in the third quarter when they were awarded a penalty stroke on Tete’s foul. However, Indian captain Savita made a great defense with the left foot and stopped Sara Barrios’s effort. Savita made another defense before India got a penalty corner but Monica’s shot was defended by Spain’s second goalkeeper Melanie Garcia.

Toppo leveled the Indian team 3-3 in the 49th minute. After this both the teams were in no mood to give each other any chance. Spain secured a penalty corner two minutes before the hooter was fired, which the Indians defended swiftly. Spain, however, secured another penalty corner just 35 seconds before the end of the match, on which Jantal hit a ground shot that went into the goal, overtaking Savita.