Fifty of a player still scored 221 runs, the opposing team lost before 20 overs, got a crushing defeat 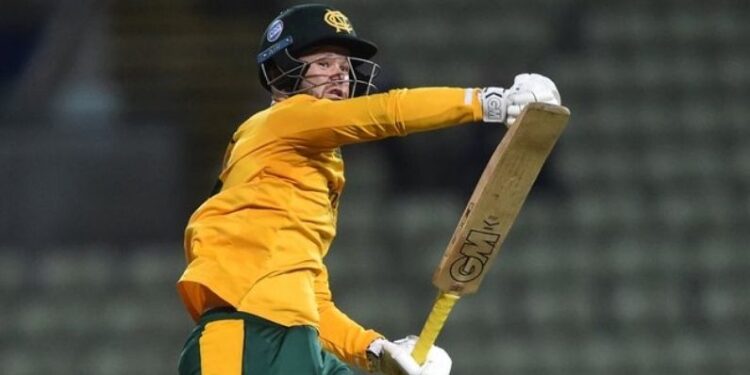 For the winning team in the T20 match, all the players together scored runs in a quick fashion. At the same time, the losing team already came under pressure and was all out in 16 overs.

Ben Duckett has also played Test and ODI for England.

It has become a common practice to score 200 runs in T20 cricket, but it is very special for a team to do this without any century or with the help of only one half-century. Something similar was seen in England’s T20 Blast. Ben Duckett’s unbeaten 74 during the match between Nottinghamshire and Durham helped Nottingham team score 241 for four. From his side, only Duckett hit fifty, no other batsman could reach 50 runs. But still Nottinghamshire scored a big score. In response, Durham’s team was reduced to 143 runs. She could not even play the full 20 overs. He had to face a huge defeat of 78 runs. For Durham, number nine batsman Matty Potts scored the highest 30 runs. Calvin Harrison took four wickets for Nottingham. With this win, Nottingham’s team reached the top of the points table while Durham are third from the bottom.

Batting first, Joe Clarke (27) and Alex Hales (35) gave Nottinghamshire a strong start. Both made the score cross 50 in the fifth over itself. Clarke was dismissed as the first wicket after scoring 27 off 19 balls with six fours. At the same time, Hales played an innings of 35 runs in 17 balls with seven fours and a six. Wicketkeeper batsman Tom Moores was dismissed without opening the account. Due to this, the score of Nottinghamshire was reduced to 71 runs for three wickets at one time. But after this Ben Duckett and Samit Patel took the lead. Both shared a 67-run partnership for the fourth wicket. Patel was dismissed after scoring 34 off 26 balls with five fours.

In the last over, captain Steven Mulani scored an unbeaten 43 runs in just 17 balls with four fours and three sixes. Duckett returned without getting out after scoring 74 runs in 41 balls with eight fours and two sixes. For Durham, Paul Van Meeckern took the highest two wickets but spent 50 runs for it.

Durham settled in the 16th over

Chasing the target, Durham had a poor start. Two of his batsmen got out for three runs. Graham Clarke and Alex Lees were dismissed without opening an account. After this the rest of the batsmen also disappointed the team. Due to this, six wickets fell for 59 runs. David Bedingham (23), Cameron Bancroft (13), Ben Rains (13), Scott Borthwick (0) returned cheaply. In the end, the number nine batsman Matty Potts scored 30 runs in just 13 balls with two fours and three sixes. Due to this Durham’s team reached 143 runs. The whole team got settled in the 16th over.

read this also: This cricketer got out in a strange way against Bangladesh, questions raised on the decision of the umpire, watch video