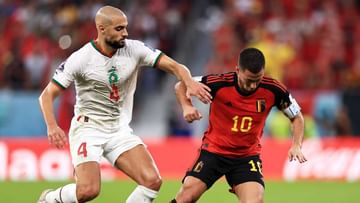 The player who played international football for 14 years has retired at the age of just 31. During this he played 126 matches and scored 33 goals.

Eden Hazard retired at the age of 31.

FIFA World Cup 2022 The quarter final matches are starting from 9th December. But, before that a big player has retired from the international stage of this fast paced game of the world. However, the retired player has nothing to do with the teams playing the quarter-finals of the tournament. This is because his team is already out of the title race. We are talking belgium football team Captain Eden Hazard, who took this big decision only at the age of 31.

The journey of the Belgian team in the FIFA World Cup 2022 came to an end at the group stage itself. Eden Hazard played 3 matches for Belgium in this tournament but could not score any goal. In those 3 matches, his team won one, lost one and played a draw. Belgium got the only victory over Canada. While Morocco defeated him. At the same time, Belgium played a draw against Croatia. The Belgian team was in Group F of the FIFA World Cup 2022, due to which the teams of Croatia and Morocco have reached the quarter-finals.

thanks for the #FIFAWorldCup Memories, Eden Hazard ❤️ pic.twitter.com/2cp3N8naYX

Belgian star player Eden Hazard shared the information of his retirement with the fans through social media. He wrote on Instagram, “I have decided to retire from international football. I would be grateful to all the fans for the continuous love and affection that you guys are getting since 2008. I am sure I am going to miss you all.

Let us tell you that Eden Hazard made his international debut in the year 2008. His international football career lasted 14 years, in which he played 126 matches and scored 33 goals. Hazard’s most spectacular journey with the Belgian team in the history of the FIFA World Cup was seen in the year 2018, when this team confirmed its place in the semi-finals. That year, the team that defeated Belgium in the semi-finals, France, also became the champion.