Fell on the pitch 3 times while taking runs, still not out, after that ‘storm’ came 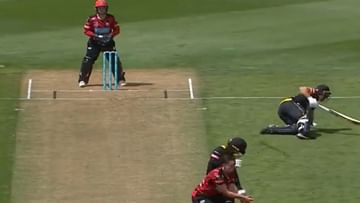 In Women’s Super Smash, Laura Harris fell 3 times while running, but still did not get out. Wellington won against Canterbury

In cricket, batsmen often get run out due to bad luck, but sometimes luck favors them in such a way that the spectators cannot believe it. Something similar is going on in New Zealand t20 league Got to see in Women’s Super Smash. In the 22nd match of Super Smash, Wellington Women’s batsman Laura Harris got lucky. This player fell three times on the pitch while taking runs, but despite this she could not get out. After this, this player made such a bang with his bat that the opponents were stunned.

When Laura Harris was playing 22 runs in 9 balls, her teammate stopped her from the second run. During this, Laura fell on the middle pitch. His foot had slipped. Laura did not give up and she got up again but she fell down again. But Laura somehow gathered courage and finally reached the crease with a dive. With this dive, Laura Harris somehow saved herself. On the other hand, the team of Canterbury remained stunned.

Let us tell you that after this life donation, Laura Harris created havoc with the bat. Laura hit an unbeaten 67 in 27 balls, her strike rate was 248.14. Laura Harris hit 9 fours and 4 sixes in her innings and on the basis of her quick batting, Wellington’s team managed to score 208 runs for 4 wickets in 20 overs.

Funniest backup you will ever see in cricket. That last somersault is too good from #LauraHarris,#SupersmashNZ #t20cricket pic.twitter.com/oAurVLFxlV

Surrender of the Canterbury team

In front of the huge target of 209 runs, the Canterbury team surrendered. The team could not even play 20 overs and got piled on just 94 runs in 17 overs. Four batsmen of Canterbury could not even open the account. Caitlin King took 3 wickets for 13 runs in 3 overs. Nicole Byrd also took 2 wickets.

Let us tell you that Wellington’s team is invincible in this tournament so far. This team has won 8 matches in 8 matches. On the other hand, Canterbury has captured the second number by winning five wins in 7 matches. Auckland has won 4 out of 8 matches.