Failed in the first match, neither bat nor ball, still became great, made everyone crazy with his voice 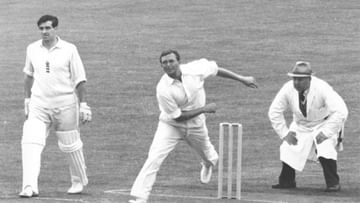 This great player not only made a different identity with his game and captaincy, but after saying goodbye to cricket, he also emerged as an excellent commentator.

Richie Benaud was as good a cricketer as he was a good commentator.

There have been many voices in the world of cricket commentary who were comforting to hear. There was no aggression in those voices, nor screams, shouts. One such voice was that of Australia’s Richie Benau. As brilliant a commentator and cricket analyst as Richie was, he was an equally brilliant cricketer. With his excellent leg spin and class batting, this player won many matches for the team. Richie is counted among the great cricketers. He is also called the great captain of Australia and the career of this great man started on this day i.e. 25 January in 1952.

Richie played his first match against the West Indies between 25 and 29 January at the Sydney Cricket Ground. Although Richie could not do anything special in this debut match. Neither his bat nor the ball was moving. But even after this, this player was successful in ruling the world later.

got one wicket in the whole match

Of course, Richie could not do anything special in his first international match, but later he won many matches for his team. Australia toured South Africa in 1957–58. Here Richie showed his mettle. After this he was made the captain of Australia. He captained Australia from 1958 to 1963. During this, he once snatched the Ashes series from England and then was also successful in saving it, that is, under his captaincy, Australia won the Ashes series twice in a row. Australia never lost a Test series during his captaincy. This great player played 63 Test matches in his career and scored 2201 runs at an average of 24.45. During this, he also scored three centuries and nine half-centuries. He has 248 wickets in Tests. He became the first player to take 2000 runs and 200 wickets in Test cricket.

add color to the commentary

After saying goodbye to cricket in 1964, Richie tried his hand at commentary and proved to be a magician here. He made many crazy with his voice. Many times in the commentary, he used to hit such wonderful punches that people were surprised. His analysis of the game was also excellent. Many dialogues while doing his commentary are quite famous. When Australia’s Glenn McGrath was dismissed for just two runs in a match, Ritchie, who was commentating, said, “And he (McGrath) missed a century by 98 runs.”

When Pervez Musharraf became a second lieutenant in the Pakistani Army. Despite this, his love…