Exclusive Interview: Dutee Chand 2.0 will be seen in Tokyo Olympics, this express will run with an experienced, confident gallop 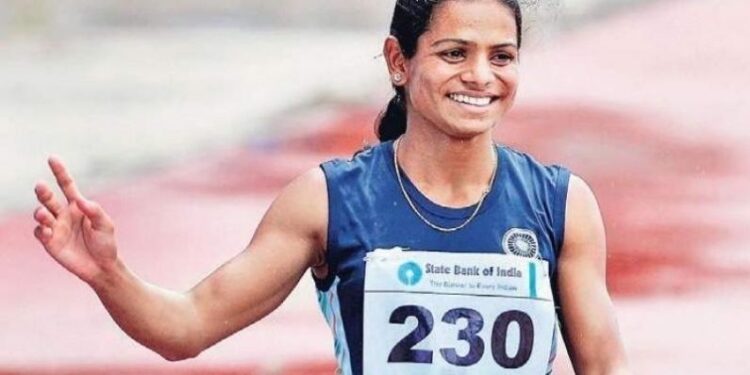 Dutee Chand has got a ticket for the Tokyo Olympic Games starting from 23rd of this month on the basis of world ranking and is preparing fiercely.

Five years ago in the Rio Olympics-2016, when India’s female sprinter Dutee Chand stepped into the 100 meters race, she was a newcomer in this world. She also used to get nervous seeing other players and she also lacked experience, knowledge. But now this sprinter will enter the Games in Tokyo Olympics-2021 to be held in Japan, then taking his second version, who is more experienced than before, who has the knowledge, who has earned a name at the international level and most importantly Overwhelmed with confidence. Overall, Dutee Chand 2.0 will be seen in Tokyo.

Dutee is extremely happy that she will represent India in the women’s 100m and 200m events at the Grand Kumbh of the Games. Dutee cut a ticket to Tokyo on the basis of world ranking and now she is leaving no stone unturned to participate in her second Olympic Games. She is honest with herself so she knows what her abilities are.

Such was the journey from Rio to Tokyo

Dutee could not go beyond Heat in the Rio Olympics, but this time she hopes to do better. In response to the question of what changed in the life of Dutee Chand from Rio to Tokyo, this Odisha sprinter told NewsNCR, “This is my second Olympics. I have prepared well for this. I didn’t have that much experience in Rio before. After 2016, I have played a lot of tournaments at the international level. So have experience and am trying to do well in Tokyo. In the Olympics, I have set a target of 11.10 and if I can do that then I can reach the semi-finals. There is a chance to reach.”

Elaborating on this, he said, “A lot has changed. At that time I was not able to train very well. Now I know the whole system of training. I know a lot about the body too. At that time when I used to go to the international level, I used to get very nervous. Seeing the players who used to come from outside, it seemed that they have never competed with them, but now I am not nervous because I have run away with the players who will come. Now I am more confident than before.”

This statement given on the recent performance

Talking about Dutee’s recent performance, she improved her national record in women’s 100m event with 11.17s at Indian Grand Prix-4 and won the race, but could not achieve the Olympic qualification mark of 11.15s. Was. At the same time, her performance in the Inter State Meet was also not special and she could not win the 100 meters.

When asked the reason behind this, the Asian Games silver medalist said, “In the Grand Prix, my focus was on achieving the Olympic qualifying mark, but in the Inter State, sir had said to focus more on the relay because 4×100 We had a chance to qualify in meter relay. So my focus was completely on him. On the first day we ran in the relay, so we did well. After this, the next day I did 100 meters, so my body was tired, so I could not perform as well. The final was also to be held in the evening, then I also got a little cramped, so I could not give my hundred percent.

Dutee has improved a lot in the last few years and she has also told one of the reasons behind this to her international level competitors. He said, “I have improved because of what I followed after seeing him. There was a time when I was running 12.5 in 100m but now I am running 11.17 and I have improved my own national record. I have broken my own record 10 times. So I have improved enough.”

aware of your abilities

But Dutee knows very well what her abilities are. He said that the range of 10.8.10.7 is not his right now. He said, “The players who are running 10.8, 10.7, I do not have the same range right now. According to the weather of India, the support I am getting, the hard work I have done and the fitness I have done, I know how far I can go, and then it will depend a lot on that day as well as to which range I can go.”

Said this about winning a medal

On the question of winning the medal, Dutee said, “I will not be able to speak about whether the medal will come or not. Our target remains that the timing is to be better. By improving the timing, we can reach the semi-finals and final.

Dutee admitted that her training was affected due to COVID but she tried to make up for it. He said, “Training in 2020 was affected a lot due to COVID. I could not do the training and competitions that I had to participate in outside the country. But in 2021 I started training. I practice from 6 to 10 in the morning, then from 11 to 12 and then from 4 to 6 in the evening. On Saturdays and Sundays I would rest.”

If Virat Kohli listens then there will be a fight! Suresh Raina gave such a strong statement on captaincy