Even after playing 100 overs, the teams were tied, the super over was also tied, then in this way England became the world champion 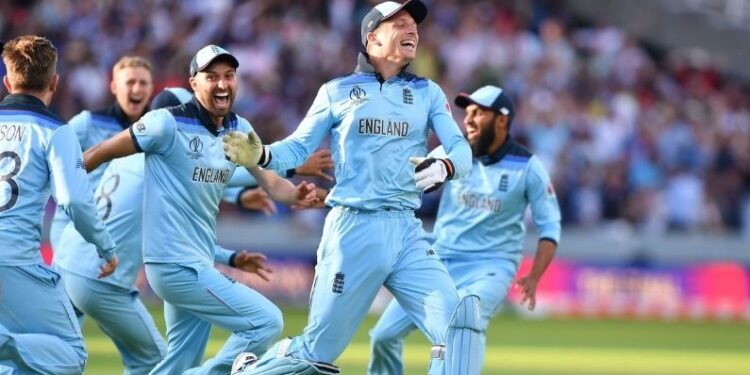 Look for luck that no one lost in this match. Just because of hitting more fours and sixes, a team was declared won and it became the World Cup winner for the first time in its cricket history of 142 years.

The England team won the Cricket World Cup for the first time in 2019.

On this day in 2019, the most exciting and great match in cricket history took place. This match had all that kept the fans glued to the game. Lots of ups and downs, thrill, drama, heartbreak everything. Never before in the history of cricket, such a match was seen and played in which even after 102 games, the score of the teams is equal and no one is less than anyone. There is no loser and see the luck that there is no loser in this match. Just because of hitting more fours and sixes, a team was declared won and it became the World Cup winner for the first time in its cricket history of 142 years. Here we are talking about the final of the 2019 Cricket World Cup. In this England and New Zealand clashed and Ouen Morgan’s team beat Kane Williamson’s army on the basis of hitting more fours and sixes and won the title.

In the match, New Zealand won the toss and elected to bat first. Due to the innings of Henry Nicholls (55) and Tom Latham (47), the Kiwi team scored 241 runs for eight wickets while playing first. Seven batsmen crossed the double-figure mark for New Zealand but scored only one half-century. Captain Kane Williamson scored 30, Jimmy Neesham and Martin Guptill scored 19-19 runs. Chris Woakes and Liam Plunkett took three wickets each for England. New Zealand’s innings passed peacefully. But when the England team came out to bat, there were many dramatic incidents in the match. Chasing the target, his top order could not do much. Jason Roy (17), Jonny Bairstow (36), Joe Root (7) and Ouen Morgan (9) were out for runs.

After the fall of four wickets for 86 runs in 23.1 overs, the responsibility fell on Ben Stokes and Jos Buttler. Both the senior players added 110 runs for the fifth wicket and took the team closer to the target. But after Butler became the victim of Lockie Ferguson by scoring 59 runs, the Kiwi team tightened the screws again. Chris Woakes (2), Liam Plunkett (10), Jofra Archer (0) and Adil Rashid (0) were dealt cheaply. But Stokes persevered. He took advantage of helpful luck as well as hitting some big shots. One turn his catch was caught on the boundary but Trent Boult’s shoe touched the boundary line. So in the second time a throw went to his bat and went for a four. With these two incidents, England finally managed to tie the match.

Such was the thrill of Super Over

Ben Stokes remained unbeaten on 84. His biggest contribution was in taking England closer to victory. However, Trent Boult bowled the last over of England’s innings and there were two runs out in this over. Due to this New Zealand dragged the match to the Super Over. In this, England batting first scored 15 runs. Ben Stokes and Jos Buttler scored this run for him. Martin Guptill and Jimmy Neesham landed in the Super Over for New Zealand. Neesham had hit a six off the third ball in the over bowled by Jofra Archer, but Martin Guptill could not complete the second run on the last ball. This tied the score once again. But New Zealand had hit 16 fours and sixes in the match, while the hosts hit 24 fours and sixes. England became the world champion just on the basis of this figure. Because it was the rule of the ICC then that the team which hits more fours and sixes in case of Super Over tie will win.

Later there was a lot of uproar over this result and rule. Now it has been changed but the World Cup slipped from New Zealand’s hands.