Even after 18 months, the same ‘fire’, ‘KulCha’ took 5 wickets together 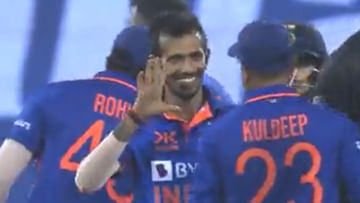 Kuldeep Yadav and Yuzvendra Chahal together took 5 wickets in the match. He achieved these wickets by giving 105 runs in 16.2 overs.

One creates pressure and the other takes wickets. The captain looks at them with confidence in search of wickets. And, they also live up to that trust. We are talking about ‘KulCha’. ‘KulCha’ means Kuldeep and Chahal, who were seen playing together for the first time after 18 months in Indore. new zealand When both of them landed on the field in the last match of the ODI series against India, people saw them shoulder to shoulder after the year 2021. And, then with his performance on the field, he also proved that he was, is and will be the strength of Team India.

For the last 18 months, the pair of Kuldeep and Chahal was broken. Even after June 2019, this was only the third time when KulCha landed on the field together. Earlier, even after being together in Team India, these two do not play together in the playing XI. Sometimes Chahal would have got a chance, but not Kuldeep. While Kuldeep would get a chance, Chahal would not. But, this did not happen in Indore. In the third ODI against New Zealand, both of them came together, played together and were seen together.

Kulcha returns on the field 🤗

The charm of ‘Kulcha’ was first seen in Indore when the century partnership between Henry Nicholls and Devon Conway put captain Rohit Sharma in tension. In such a situation, Captain Rohit handed the ball to Kuldeep with great confidence. And, Kuldeep lived up to this trust. He broke this partnership by dismissing Henry Nickels as soon as he came on the attack.

But, the original picture of Kulcha was just a trailer. After this Kuldeep dismissed Michael Bracewell. After this he dismissed Lockie Ferguson. Seeing Kuldeep doing wonders, even Chahal got excited. He did the work of hammering the last nail in the fort of New Zealand. Chahal dismissed Jacob Duffy and Mitchell Santner and with this the match also ended.

Another comprehensive performance from #TeamIndia as they outclass New Zealand by 90 runs in Indore to complete a 3-0 whitewash.

Kuldeep and Chahal took 5 wickets together in the match. He achieved these wickets by giving 105 runs in 16.2 overs. In this, Kuldeep spent 62 runs in 9 overs for 3 wickets. While Yuzvendra Chahal took 2 wickets for 43 runs in 7.2 overs.

India got many positives from the ODI series against New Zealand. But there is no doubt that Kulcha is the best among them. The more opportunities the team management gives them to play together, the more they will be seen on fire. Simply put, if these happen together, then India’s talk will continue.