Euro 2020: Christian Ericsson, Denmark vs Finland and the accident that shook the football world, which was averted 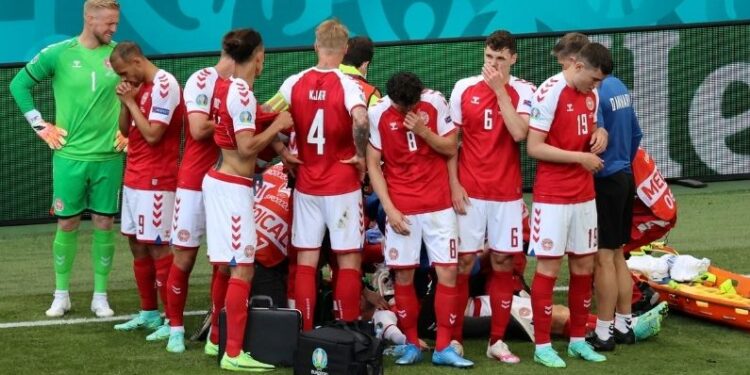 Denmark midfielder Christian Eriksen collapsed on the field during the match against Finland, which shook the football world.

Saturday evening in Euro Cup 2020 (UEFA Euro 2020) was very scary. The first match of Group B in Copenhagen was being played between hosts Denmark and Finland (Denmark vs Finland). During this match, Danish midfielder Christian Eriksen suddenly fell on the ground, which stunned everyone. Ericsson was later taken to hospital, where he continues to be treated and is in a stable condition. This shocking development tells you the whole situation.

The match between Denmark and Finland started at 9.30 pm Indian time at Parken Stadium in Copenhagen. The match was progressing near the end of the first half, but Denmark got a throw to the right of Finland’s goal in the 43rd minute.

The Danish player threw the ball towards Ericsson. As soon as Ericsson stopped the ball, then he stumbled and fell unconscious.

The match referee immediately stopped the match and the Danish players rushed to pick up Ericsson. During that time the medical team came on the field and started examining Erikson.

The medical team also tried to give Ericsson CPR. During this, pain and fear were visible on the faces of the Danish players. Still, keeping the courage, he surrounded his fellow player from all sides to protect him from the eyes of the cameras and the fans.

After this, Ericsson was immediately taken out in a stretcher. However, it was a matter of relief that Ericsson appeared conscious and his eyes were wide open. Soon UEFA postponed the match due to medical emergency.

An update was issued by the Danish Football Association and UEFA shortly after that Ericsson was admitted to the Rigshospitalet Hospital in Copenhagen, where his condition is stable.

Along with the football world, fans all over the world also started praying for Ericsson’s well being. From football players and clubs to other sports players also prayed for Ericsson. Germany’s football team, part of Euro 2020, united in front of the big picture of Ericsson and expressed support for the legendary Danish player.

After this, the match between the two teams started again at 12 o’clock Indian time, in which Finland won by scoring a goal in the second half. Finland is playing in a major international tournament for the first time and surprised Denmark in the very first match.

Christian Eriksen, 29, is one of Denmark’s most famous and most successful footballers. He has played 109 matches for Denmark so far, in which he has scored 36 goals. Ericsson started his professional career with Netherlands club Ayaks in 2010, where he scored 25 goals in 113 league matches.

After this, he was bought by the famous English Premier League club Tottenham Hotspur in 2013, with whom he remained till 2020 and scored 51 goals in 226 league matches. In January 2020, Ericsson joined Italian club Inter Milan, where he helped make Italy champion this season after 11 years.