Euro 2020: 3 contenders for the title trapped in ‘Group of Death’, the fate of stars like Ronaldo-Mbappe will be decided 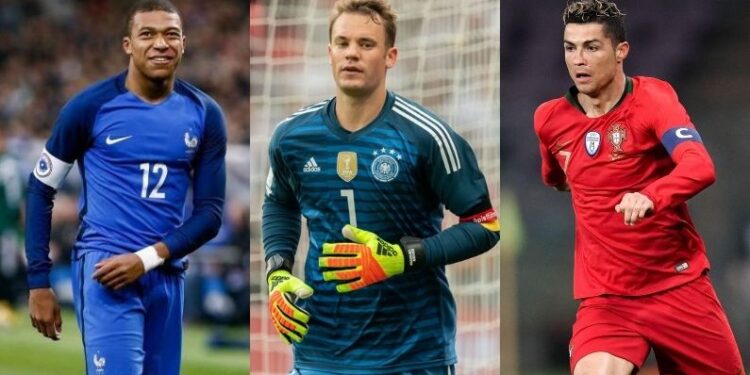 Group F is the toughest in this tournament with 24 teams and 6 groups, as it is full of champion teams and title contenders.

Group F of Euro 2020 has teams like France, Germany and Portugal, due to which it is the toughest group.

The world’s second most famous international football tournament Euro Cup (UEFA Euro 2020) is now starting after a year’s wait due to Coronavirus. In this competition to be held between 24 teams of Europe, the champion will be decided after a month i.e. on July 11. These teams are divided into 6 groups. It happens every time from the World Cup to the Euro Cup, that one group is the most difficult compared to all the other groups, because in this all four teams or generally three teams are very strong and are the contenders for the title. Such a group is considered a ‘Group of Death’ in the football world, because at least one contender is eliminated in the first round.

This time the last Group F of the Euro Cup is the group of death, because it has three of the best teams in Europe – France, Portugal and Germany. The fourth team to complete the group is Hungary, who are far below them in terms of performance as well as in the FIFA rankings. In such a situation, Hungary is already in a difficult situation, but the most eye is on which of the other three teams will be cut already. For this, we give you basic information about the four teams of Group F.

First of all, about Portugal. One of the best players in football history and the most powerful goalscorer Cristiano Ronaldo, Portugal’s team has emerged very strongly in the last few years. The team also presented its view in 2016, when despite Ronaldo’s injury in the final, the team won the title by defeating a strong team like France. This was Portugal’s first title and this time the team is stronger than before and is a contender to defend its title. Apart from Ronaldo in the team, there are players like Bruno Fernandez, Diogo Jota, Bernardo Silva and Ruben Dias, who have performed tremendously in the last few months.

The strongest team in the Group of Death is France. France, who finished runners-up in 2016, has also rectified its disappointing performance in various tournaments in recent times after the 2006 World Cup. France, which lost the final of Euro in 2016, won the World Cup title in 2018. At that time many young players had an important role in the team’s victory and this is the strength of this team. Many of the major clubs in Europe’s top domestic leagues are filled with French players, who are consistently performing well. This time France is being considered as the number one contender for the title. France has won the Euro Cup twice before. The team has young sensation Kylian Mbappe along with veteran forwards like Antwan Griezmann, Karim Benzema, Ngolo Kante, Paul Pogba, Hugo Lloris and Rafael Varane.

Germany, one of the most successful teams in football history, makes this group more difficult. The performance of 4-time world champion and 3-time European champion Germany has dropped in the last 4 years. The team reached the semi-finals of the 2016 Euro, but then was eliminated in the group round at the World Cup. Apart from this, the performance of the team in the qualifying round was also not very convincing. Despite this, no team can make the mistake of ignoring this power house of Europe. Apart from captain and goalkeeper Manuel Noyer, the team has experienced and talented young players like Tony Krause, Thomas Muller, Joshua Kimmich, Ilke Gundoan, Kai Howertz and Timo Werner.

In the end, it was about Hungary, the weakest team in the group. Hungary, ranked 37th in the FIFA rankings, is very weak compared to the rest of the teams and has been able to qualify for the Euro only for the fourth time. This team’s best performance at Euros came in 1964, when the team finished third. However, this success could never be repeated. The team entered the tournament after playing a few good matches in the qualifying round, but it is difficult to progress beyond the group stage, unless there are any upsets. The team has players like goalkeeper Peter Gulaschi, Adam Salai, Adam Ngi and Dominic Soboslai. However, Soboslai has been kept in the team despite the injury.

Also read: Germany is the emperor of European football, the names of the most successful team of Euro Cup are the best records