ENG W vs IND W: England won the second ODI with India’s ‘turtle’ move and their cross, took an unassailable lead in the series 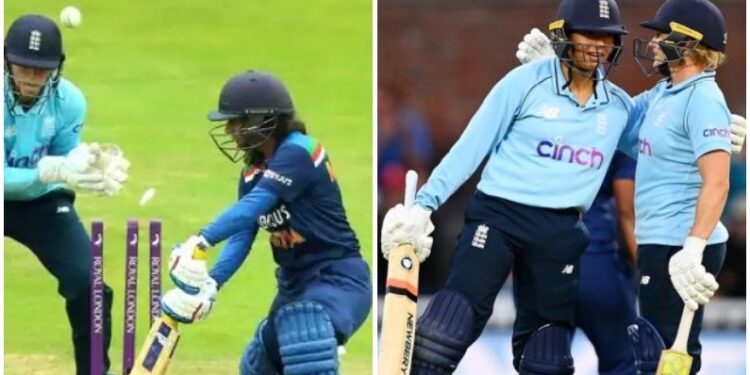 The Indian women’s team has also lost the second ODI against England. Meaning this time the match has gone out of hand. With this he has lost the chance to win the series as well.

Host England has defeated the Indian women’s cricket team in the second ODI as well. England women’s team won this match by 5 wickets. After the defeat of the first ODI played in Bristol, it was very important for India to win the second match played in Taunton. But, along with losing it, he has also lost his hopes of winning the series. The Indian team is now 0-2 behind in the 3-match ODI series against England. This means that even if they win the last ie the third ODI of the series, even then the one-day series will remain with England.

In the second ODI also, India’s condition remained the same as in the first ODI. His tortoise trick in batting continued here as well. The run rate on the score board seemed to bounce only as long as Shafali Verma was present at the crease. As soon as Shafali was dismissed, it became difficult for the batsmen to score runs. The run rate which was above 4.78 during Shafali’s time, the incident that started then did not go up. This slow and defensive game of the Indian batsman was taken advantage of by the England bowlers, especially Kate Cross.

Playing first in the match, the entire team of India was all out after scoring 221 runs in 50 overs. Indian captain Mithali Raj scored the highest 59 runs in this. But, for this he played a total of 92 balls. That is, 33 balls more than the number of runs scored. Opener Shafali Verma scored the second big score for the team. He scored 44 runs in 55 balls. The distance between Mithali and Shafali’s runs and their balls is enough to open the pole of Indian batting and tell the truth. The captain of India played a slow innings. Vice-captain Harmanpreet Kaur also did not lag behind. He scored 19 runs but played 39 balls more for this. That is, if seen, 53 balls i.e. the entire 9 overs of the match, India’s captain and vice-captain together spoiled the Indian innings in the match.

The England bowlers took full advantage of this weak pulse of the Indian batsmen standing on the backfoot. Kate Cross was the most successful bowler for England, who dismissed 5 batsmen for just 34 runs in 10 overs. Apart from these, Ecklston took 3 wickets.

England now had a target of 222 runs, which they achieved by losing 5 wickets in 47.3 overs. That is, the host team won the second ODI by 5 wickets as well as won the first 15 balls as well. For England, Sophia Dunkley played an unbeaten and powerful innings of 73 runs in 81 balls. At the same time, Kate Cross, who took 5 wickets, was given the man of the match.

With the victory in the second ODI, the England team has already captured the 3 ODI series. Now he also has a chance to do a clean sweep in front of him. It is expected that Mithali Raj & Co., which has lost the series, will at least be able to thwart this plan of theirs.

Also read: What should BCCI do to take women’s cricket forward? This former player told the way