ENG vs NZ: Virat Kohli’s enemy bowlers return, will sharpen the edge before the clash against India 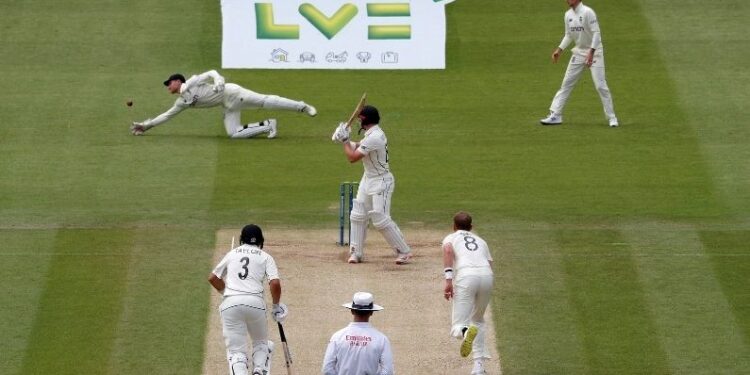 The first Test match between England and New Zealand at Lord’s was a draw and the second match of the series will be played from June 10 at Edgbaston Ground in Birmingham.

The first Test between England and New Zealand ended in a draw. (Photo: AFP)

The first Test match between England and New Zealand at Lord’s was a draw. The results kept coming and going on the last day of this rain-affected Test match. Now eyes are set on the second Test match to be held at Edgbaston ground in Birmingham from June 10. Through this match, England will try to return to the path of victory. This team has failed to win 4 matches in a row. On the other hand, New Zealand will be aiming to go with a good momentum by seizing the last chance before the ICC World Test Championship final against India. For this match, two such bowlers are returning in both the teams, who have troubled the captain of the Indian cricket team, Virat Kohli.

New Zealand bowlers performed well in the first test match. Especially in front of the most experienced pacer Tim Southee, the English batsman looked breathless. At the same time, the performance of Kyle Jamieson and Neil Wagner was also good. The already dangerous bowling attack will now be strengthened by the team’s left-arm fast bowler Trent Boult, who could not play the first Test match due to the Quarantine issue.

Bolt returned to his home in New Zealand instead of coming to England with the team after the IPL was postponed in the middle of 2021. Due to this, on reaching England, he could not play the first Test due to the quarantine rules. There were also doubts about his playing the second Test, but team coach Gary Stead has told that due to the relaxation of the quarantine rules on the part of the British government, the possibility of Bolt playing in the second Test has become.

Base also got place

At the same time, the England cricket team has once again called off-spinner Dom Bess in the team for the second match. Bess did not find a place in the squad selected for this series, but Bess has been called back in the squad hoping to play the spinner in the second Test. Bess played two Test matches on the tour of India.

However, Bess will not get a place in the playing XI directly. He has been brought in as cover for left-arm spinner Jack Leach. In this regard, England coach Chris Silverwood clarified that if Leach gets injured before the match, or suffers a concussion during the match, Dom Bess will be included as a change.

Opportunity to prepare before the clash against India

England and New Zealand have to play Test matches against India in the next few weeks. First New Zealand and India will face in the final of the Test Championship. In this final, Bolt will play in any case, but before that match, he will be able to test himself against England. Anyway, Bolt is New Zealand’s most successful bowler against Indian captain Virat Kohli. He has dismissed Kohli 3 times.

England, on the other hand, also has to play a 5-match Test series against India at home in August. In such a situation, he would like to try more and more of his bowlers. Bess recently played two Tests on the tour of India. In this, in the very first innings of the first Test held in Chennai, he achieved success by hitting Virat Kohli.

Also read: Another disaster for Joe Root and England, ICC punished this mistake in Lord’s Test