ENG vs NZ: Debut of the bowler who took 188 wickets in 4 years at Lord’s, the wicketkeeper who scored runs also got a chance 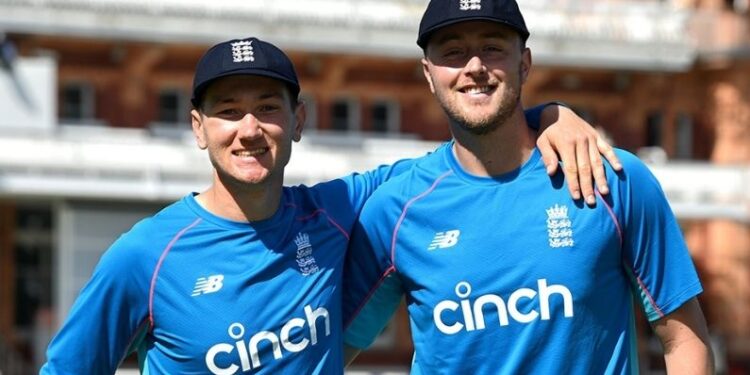 There are not many big players in the England team for this series, due to which new faces have got a chance to make their Test debut.

Bracey and Robinson made their debuts for England in the first Test at Lord’s. (Photo: England Cricket)

The first Test match between England and New Zealand started on Wednesday 2 June at the historic Lord’s Ground. In this two-match series, not many big legends are playing for England and in such a situation some new players were included in the team. Two of these players made their debut at Lord’s. One of them is wicketkeeper-batsman James Bracey and the other is fast bowler Oliver Robinson. Of these, Robinson’s debut was certain, but Bracey got lucky, as England’s leading wicket-keeper Ben Foakes was out injured 6 days before the series. In such a situation, Bracey’s name was decided in the playing XI.

Both these players have shown their good performance in the County Championship, England’s domestic first-class tournament. James Bracey has also been a part of the dressing room with the English team for some time now. On the other hand, Robinson has been England’s most successful bowler in domestic cricket in the last 3-4 years and has taken a flurry of wickets. Obviously the entry of both of them in the team is not surprising, so it is also important to know about them.

Let’s talk about Bracey first. Bracey, 24, is a left-handed batsman who bats in the middle order. Here Bracey has proved to be a very useful batsman, generally handling the innings. He is also technically a strong wicketkeeper and also does wicketkeeping for his team of Gloucestershire. According to ESPN-Cricinfo, he is the first player from Gloucestershire to make it to the English Test team in the last 15 years.

Bracey has batted well in the ongoing county season in England. During this he has scored one century and 4 half-centuries. Bracey has scored 2575 runs in his 45 first class matches, which includes 6 centuries.

He has been a frequent part of the English team since the Test series against West Indies last year and also visited Sri Lanka and India. However, after the injury of Ben Fox, now he got a chance to debut at Lord’s.

Now let’s talk about Oliver Robinson. This right-arm fast bowler has been the most successful in England in the last 4 consecutive county seasons. Robinson, who plays for Sussex in the county, is known to bowl with precise lines and lengths and that is why he has found consistent success. In the 2018 county season, he took the highest 74 wickets in his name. Even after this, his streak of success continued and he has taken 188 wickets in 3 and a half seasons since 2018, which is the best performance of any fast bowler in England in these seasons. Before making a place in the English team, Robinson had taken 29 wickets in this season as well, in which 9 wickets for 78 runs came in his account in an innings alone.

Also read: WTC Final: Virat Kohli expressed his intention, now New Zealand will not get the advantage of the circumstances