Dispersed the top order on 12 balls, the 32-year-old all-rounder’s power, the match ended in a pinch 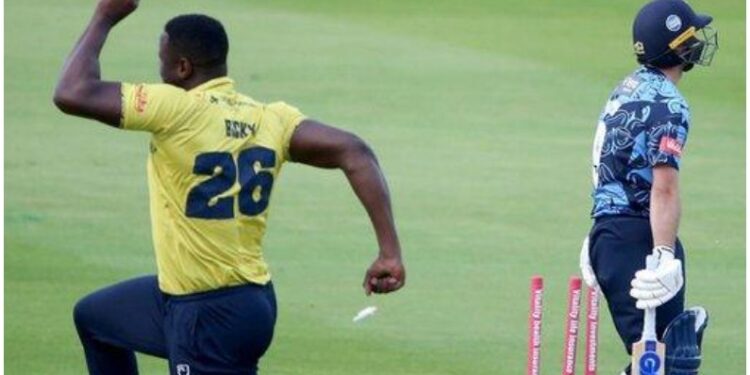 As a cricketer all-rounder, the player single-handedly pushed a team on the path of surrender. The opposing team also walked on the path made by him and the effect was that the match went inside his team’s pocket.

One more match. Another blast. In the victory of the team, he again waved the flag of his performance. Yes, Carlos Brathwaite… you must have heard the name. While making West Indies the world champions of T20 in 2016, he must have seen the amazingness of his 4 sixes in 4 balls. But, the reality of the moment is different. West Indies team is playing T20 series with South Africa. But Carlos Brathwaite is out of the team. On the other hand, the Caribbean team on its own soil is behind after losing the series. Here Brathwaite has spread his performance on the soil of England. We are talking about the amazing performance of this 32-year-old Caribbean all-rounder in T20 Blast.

The match was between Yorkshire and Birmingham Bears. Braithwaite was part of the Birmingham Bears. Yorkshire batted first in the match. But, her debut itself, Brathwaite spoiled it with her amazing bowling that she could not get back on track again. As a result, it happened that while playing 20 overs for the entire team, it became a far cry and even crossing the threshold of 100 runs remained as far away as Delhi.

Brathwaite bowled the first over for Birmingham Bears in the match and took the wicket of a Yorkshire opener in the very first over. After this, when he brought his second over, he took two more wickets of the top order. That is, Brathwaite scattered Yorkshire’s top order in just 12 balls. He bowled 2 overs in the entire match and took 3 wickets for just 7 runs. Brathwaite played dot 8 balls. Whereas in the name of boundary, he ate only 1 four.

Yorkshire lost the match in 8.3 overs

The effect of this ruckus created by Brathwaite showed that the entire team of Yorkshire was piled up after scoring only 81 runs in 15.3 overs. Birmingham Bears now had a target of 81 runs required for victory. He did not wait much to achieve this target, but won only the first 51 balls of his innings. Both the openers of Birmingham Bears together chased the target of 82 runs in just 8.3 overs. That is, because of Brathwaite’s awesomeness, Yorkshire had to lose this match by 10 wickets and 69 balls earlier.

Brathwaite has the most wickets in T20 Blast

Carlos Brathwaite has also become the highest wicket-taker in T20 Blast by taking 3 wickets in the match against Yorkshire. In the 9 matches he has played so far, he has taken 18 wickets at an average of 13.33, in which his best performance is the amazing 3 for 7 against Yorkshire.

Also read: ENG W vs IND W: England won the second ODI with India’s ‘turtle move’ and the amazing of his cross, took an unassailable lead in the series