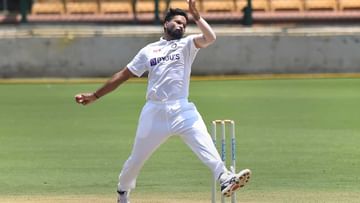 Many names will be seen in Shami’s claim in the Test team. But, according to the reports that are being received at the moment, two names are ahead in this race, between which there is direct competition.

A song is very popular these days. If not me then who? enough Team India Same thing is going on in me. If not Shami then who? This question is related to the Test series against Bangladesh. He is associated with the Test team of India. Already there was the name of experienced fast bowler Mohammed Shami. But, now that he has been injured, the question is bound to be that if not him then who? Many names will appear in the claim. But, according to the reports that are being received at the moment, two names are ahead in this race, between which there is direct competition. These two names are Mukesh Kumar and Umran Malik.

Umran Malik is part of Team India’s camp in the ODI series. He is also doing well with white ball cricket. But, the big question is whether he is ready for red ball cricket. And if so, will he get a chance to make his Test debut? Whether he will get a chance to debut or not, the same question is with Mukesh Kumar as well. Like Umran, Mukesh may not be a part of Team India but he is also present in Bangladesh.

Mukesh dropped half the team for 40 runs in Bangladesh

Mukesh Kumar is currently on a tour of Bangladesh with the India A team. He is playing a first class match there against Bangladesh A. He has also done his career best performance in the second Test against Bangladesh A, where Mukesh Kumar took 6 wickets in the first innings for just 40 runs. With this performance, the bowler coming from Bengal left behind his best performance against Karnataka in the Ranji Trophy in the year 2020. Then he took 6 wickets for 61 runs.

Difference between Umran and Mukesh

Now Umran has edge, speed and international experience with white ball. That means he has played India. Have spent time in its dressing room. Whereas Mukesh Kumar does not have any international experience. Did not play for India in any format. But, as soon as the red ball comes in hand, that is, with which Test cricket is played, it is leaving its impact. And most importantly, this effect is visible only in Bangladesh. Apparently the Indian team management has also caught sight of him. That’s why his name has also sprung up as Shami’s replacement.


If not Shami then who? Finding the answer to Team India only

However, now it is up to Team India to see what is its need. Who fits his scale? But if on the basis of the current performance of Umran and Mukesh, it can be said that both of them are running equally in the race to replace Shami.